- USD/CHF resisted off of a key area again this morning. Should USD-strength continue, a bullish move over this resistance level can open the door to breakout strategies in Swissy.

- While USD weakness continued well into this month, USD/CHF has been range-bound since July, deductively highlighting a relatively weak Swiss Franc that could become attractive for continuation should USD-strength continue to show.

- Want to see how USD has held up to the DailyFX Forecasts? Click here for full access.

The U.S. Dollar has had a rather rough 2017. In a down-trend that’s seen as much as -12.3% of the U.S. Dollar’s value erased, even while the Fed talks up additional rate hikes, few currencies have been able to keep pace with the Greenback’s declines. After coming into the year trading above the 1.0300 level, USD/CHF has seen as much as 925 pips taken-out as the pair has driven-lower.

But after running into support in mid-July around the .9433 level (the 2016 low), the declines have slowed as USD/CHF has built into a rather volatile range-bound pattern. Resistance has begun to build around the .9773 level, and we’ve seen multiple iterations of resistance show-up here; each rebuking USD/CHF’s upward advance. 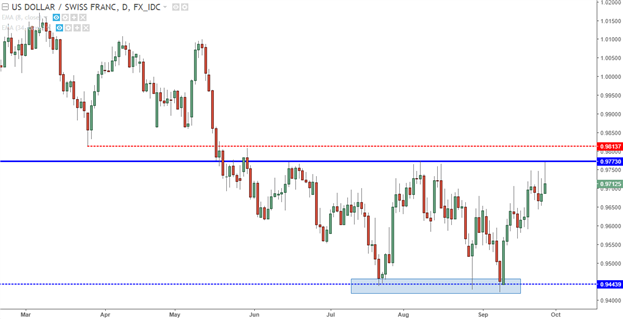 At this point, a top-side break of that well-worn resistance level could open the door to an attractive bullish breakout setup. Just above this area of resistance is another level of interest at .9813, as this is a prior swing-low point of support that also showed as a quick swing-high before the pair initially sank below .9770. This can be used in a couple of different ways. For traders looking at the more aggressive route of taking on bullish exposure on a break of .9775 (a few pips beyond the exact point of resistance), the level at .9813 can be utilized as an initial target and an opportunity to move the initial stop up to breakeven. Or, for those who want to approach USD/CHF a bit more conservatively, the .9813 level can be used to trigger the bullish breakout, with .9772 becoming an area to look to for stop placement in the effort of containing risk in the event that the breakout doesn’t continue-higher.

On the chart below, we’ve added five potential resistance levels above the .9813 inflection point, each of which has been derived from a prior price action swing and/or group of swings. Each of these can be used as potential targets should the bullish breakout continue if/when resistance is taken out. 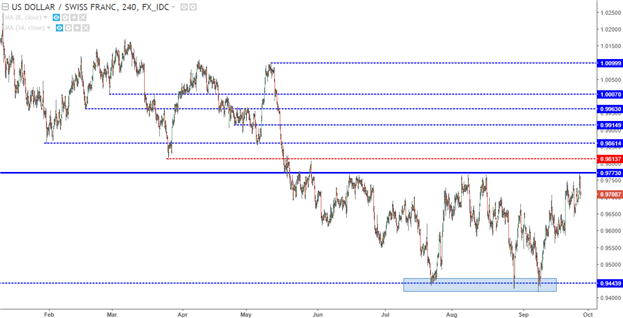