In our last article, we looked at the aggressive down-side break out of the previous megaphone pattern in USD/CHF. And while this down-side break was very much driven by a weaker US Dollar under the premise of lower rate hike expectations out of the United States, more recently, the Swissy has taken on a tone of it’s own as it’s stayed relatively range-bound while the greenback put in an aggressive two-way move. First, USD rallied leading into last week’s FOMC meeting, and then sold off in the aftermath. For most of this time, USD/CHF stayed within a relatively clean range.

The top-end of the range has been defined by the February swing low at .9660, while the support side of the range has come in just a little above the 38.2% Fibonacci retracement of the most recent major move in the pair, taking the May 2015 low to the November 2015 high. On the chart below, we take a look at this recent range-bound price action in USD/CHF after the down-side break of the previous megaphone pattern. 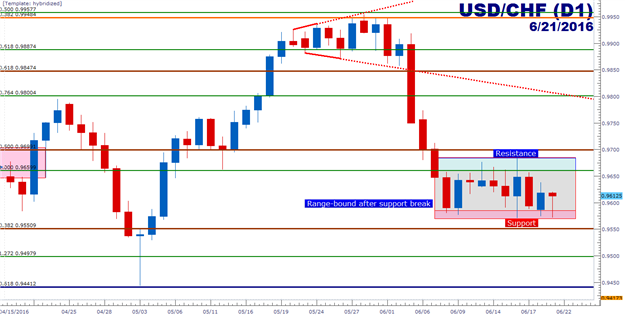 With such an observation in a normal environment, traders can approach the setup in one of two ways. Either a) selling resistance and buying support with a stop on the outside of the range or b) letting the range break, and then looking to trade a new trend in the direction of that range break.

However, given the upcoming Brexit vote and the profound potential ramifications that may emanate, traders will likely want to approach with more caution than usual. Traders may even wait for the announcement of the results of the upcoming Brexit referendum before picking a direction in USD/CHF, allowing for price action to pose a legitimate breakout of the range before looking to get on that side of the market.

Traders should be extra careful of playing the range here as the Swissy, like many other European markets, is exposed to risk in the upcoming Brexit vote. This means that stops could get gapped against, and when trading a range with less than 100 pips between support and resistance, the reward side of the setup simply may not allow for an attractive setup with so much potential gap risk against a stop.

On the chart below, we take a closer look at the range; and traders can use this as potential jump-off levels for after the Brexit referendum. If price action surges above .9700, this could open the door to top-end plays; whereas a break of the support zone in the .9575 area could open the door for down-side continuation strategies. 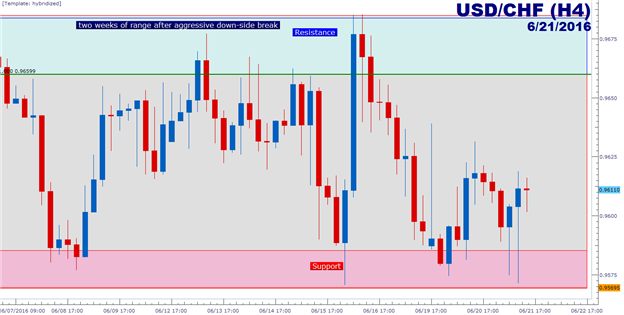