USD/CAD continues to trade with weights around its ankles, unable to muster more than a day or two of rallying before sinking back to new lows. The 2018 low barely led to a pause, the 2017 low helped induce one of those two day rallies until the June 2020 underside trend-line was met. Now we are looking at the worst levels since May 2015.

The next level to watch arrives at 11919, a significant swing-low created during May of 2015. However, it’s not a yearly low, so that makes it less meaningful. Outside of that low there isn’t anything else price-wise that is meaningful for some distance lower.

If price can hold around the 2017 low, giving it a little wiggle room, then perhaps we may see a rally develop, but price action is quite uninspiring for such an event. As mentioned last week, a strong reversal or bullish engulfing day from around a low could change the outlook for a bit.

But until we see some force in an up-move the path of least resistance continues to be firmly lower. From a tactical standpoint, existing shorts from higher levels may want to hold for lower levels while maintaining some type of trailing stop strategy in the event of a reversal.

Fresh shorts don’t hold much appeal from a risk/reward perspective, while longs hold no appeal until we see some type of strong upward price action that suggests a squeeze may be getting underway. Even then it may be a tough counter-trend type trade. 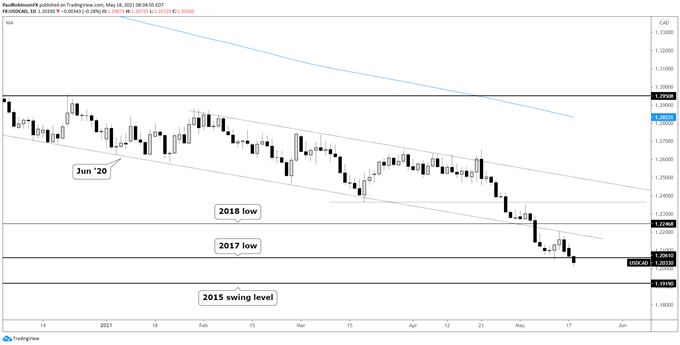