FTSE 100 Technical Analysis: Rolling Over, May Sell Off Soon

FTSE rolling over, could accelerate soon

The FTSE remains a real soft spot in global equities, especially when compared to the bubbly U.S. stock market. If the leading U.S. market has even a healthy correction, which looks probable given its frothiness into a seasonally weak time of the year, it could spell trouble for the faltering FTSE 100 index, as well as lagging European indices.

The downward grind since early June has kept the longs in the game via a developing bull-flag, but given the weak relative strength factor versus the risk spectrum it is looking increasingly likely that we could soon see an acceleration lower.

The trend-line from March (albeit a weak source of support given its lack of touch points) is starting to break. The big level to watch is the August low at 5852, which if broken will lead to a test of the bottom-side of the downward channel (potential bull-flag).

It is a break below this channeling structure that is seen as a real sign of increased selling pressure. If the FTSE stays confined within, then price is still trending lower but of course at a relatively benign pace given the angle of descent. However, a break below the lower parallel is likely to turn benign into something more. If risk appetite on the whole is also weakening, then probability of a sharp drop will increase significantly.

All-in-all, we aren’t quite there yet to make the call for a big sell-off, but time appears to be running out for the FTSE to get its act together… 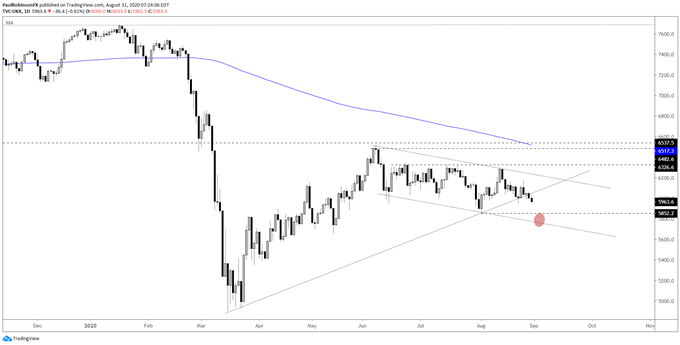