FTSE 100 Looking to Support Levels to Stay on Course

When we last discussed the FTSE 100, it had just exploded to new highs with the help of solid global risk appetite following U.S. President Trump’s address to Congress and a weak pound. The index edged above the top-side 2013 trend-line and was squaring up against an upper parallel paired off with the trendline rising up from early February. Since turning lower the footsie is trading back below the long-term top-side trend-line and the old highs from January. The upper parallel proved to be pivotal, so we’ll keep a close eye on it should it come in play again on the way back up.

For now, we will be looking to a series of levels below for support. First the ~7330/00 area, where several intra-day highs took place during the third week of February. Looking closer at price action (1-hr chart), we can see the development of a bull-flag. The pattern needs to fully mature and eventually break the top-side parallel, but it could be a solid guide for new long entries.

Should we see the ~7330/00 area give-way to selling and the bull-flag configuration broken, then a larger decline could be underway, which may bring the 2/2 trend-line into play down near 7250. If the current technical structure is to remain pointed towards new highs in the very near future, then short to intermediate-term trend support will need to hold. A drop much beyond there won’t ‘wreck’ the trend, but start raising questions. Not far below the above-mentioned levels lies longer-term trend support by way of a trend-line extending up from the ‘Brexit’ lows (it’s been drawn in a couple of ways given the extreme tail caused by the vote, but both run in the same neighborhood at this time). In addition, the 2/24 pivot is in the area as well. A break below the June trend-line and swing low, an event not likely in the very immediate future, would be required to fully back off a bullish bias, and likely means we are seeing broad global risk aversion not isolated to just the U.K. 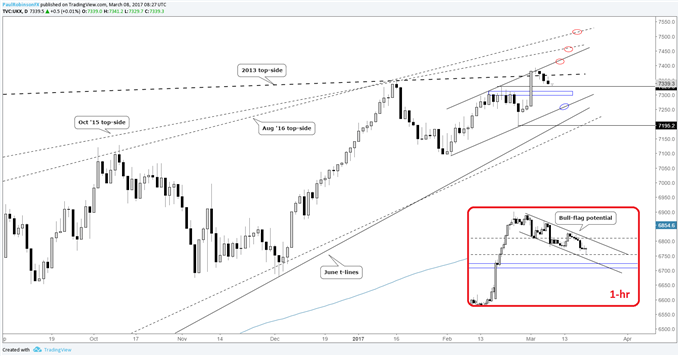 Join Paul on Tuesday’s at 10 GMT for “Indices & Commodities Analysis for the Active Trader”. For a schedule of all upcoming live events, please see the Webinar Calendar.