In yesterday's piece, we noted the impressive rip higher after a locked-limit reversed higher throughthe August trend-line. Since the 2009 low, retracement buyers have been richly rewarded in equities, and that trend looks to continue. The break above the Trendline resistance that started with the August high shows the path of least resistance looks higher once again.

What is surprising many is the subsequent rise in yields, equities, and USD post-election. Much of this has to do with speculation of repatriation of capital to the US that may be in anticipation of lower corporate taxes and new trade agreements drawn up by President-Elect Trump’s administration. The old macro view had been set that USD strength was bad for equities and tended to align with UST yields falling on a risk-off view that meant more Federal Reserve easing.

However, you can see a sharp move higher in yields that has tallied a greater than 20% rise since from the intra-day November low on election night. This move higher in yields is aligningwith the US Dollar trading at 9-month highs with DXY above 99. The three markets aligning higher show expectations of fiscal stimulus that could lead to inflation alongside favorable tax reform and looser regulation that may continue to boost a rotation from the overinflated bond market into equities. This story has been credited for pushing the DJIA (CFD: Wall Street) to new all-time highs. 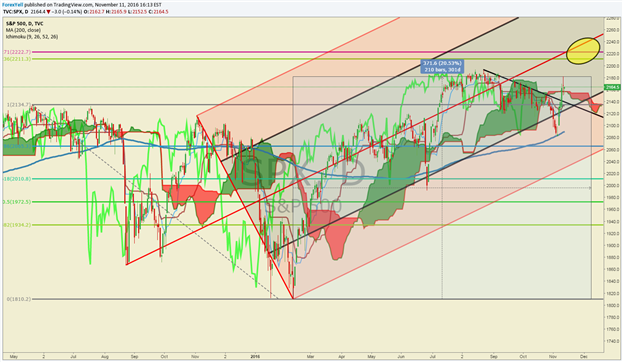 The Daily S&P 500 shows the larger trend higher within the Andrew’s Pitchfork, and a recent break higher above the Ichimoku Cloud and Trendline resistance drawn of the lower-highs starting in September.

You’ll also notice the strong move higher off the 200-DMA (2089) that favors continuation higher on the back of the fundamental factors underpinning the move. While the move higher may continue to unfold in a choppy manner, we’ll keep the focus on the intraday all-time high from August of 2193 followed by 2199 calculated breakout target.

Check out Trading Guides and Forecasts designed for traders of all experience levels.