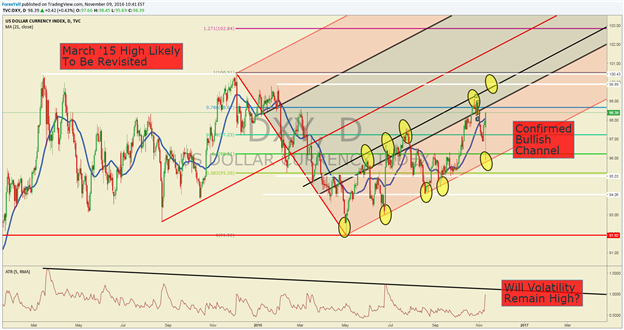 Few would have thought Brexit would have been Risk-On. However, looking at the risk-assets after the votes were tallied on June 24 made it appear exactly that. Now, it’s time to see if the nomination of Donald Trump to the Presidency of the United States has a potential to strengthen the central bank’s resolves to support markets while the US Dollar looks well support on the DXY chart.

The volatility naturally has a lot of trader’s perplexed. As polls began to give Trump the clearer path to 270 electoral votes than Clinton, the US Dollar began to weaken against the Japanese Yen and EUR, hitting 101.20 and 1.1300 respectively. As mentioned on Monday’s Macro webinar, there were record premiums in the options market being paid on one-week calls relative to puts on EUR/USD that looked to have been triggered.

However, we now sit in the 100-days before President-Elect Trump takes office, and in the meantime, a lot of focus will appropriately be on the Federal Reserve. The Federal Reserve will meet on December 14, and the pricing in of a rate hike has been about as volatility as the Mexican Peso over the last 12-hours. The market is back to pricing in a Fed rate hike after falling to ~40% chance overnight. There continues to be hesitation to think the Fed will proceed in a similar fashion as if the Clinton had won because most models and forecasts, Clinton was the winner. We will find out more in upcoming speeches before the Fed meets in December.

The chart above shows the sharp ascent of DXY from overnight lows. While we looked at the similarities between the Brexit vote in June and the US Election above, there is a stark difference in that in a zero-sum game; there could be more for the USD to gain at the expense of trade partners like Canada and Mexico.

Andrew’s Pitchfork on the chart above has done a fine job of framing price action, and a hold of the Bullish channel helps to validate the Bullish sentiment and a possible move to 100 like we saw in March & December 2015.

In the last note, we shared that we should await a bullish reversal. Wednesday’s price candle is known as a Bullish Key Day where the low is below yesterday’s low, and the close appears to be setting up to settle above yesterday’s high.

As noted above, the fundamental shift will turn attention to the Fed and how they will proceed with President-Elect Trump. We recently noted that Fed voting members joining the voting committee after the “priced-in” hike would be decidedly more dovish.

A long-held question has been when would the market take the Dollar direction out of the Fed’s hands. It’s possible the Trump Presidency that starts in late January could do just that, and one of the first signs would be a clear break above 100 on the DXY, which the charts currently favor.