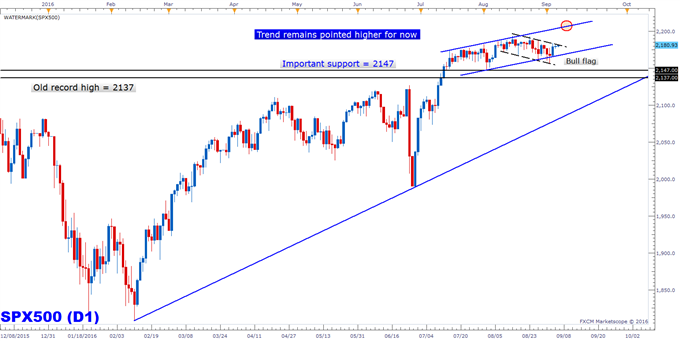 The S&P 500 has been a challenging index to trade since around the middle of July, as summer trading conditions and exhaustion post-Brexit hit the market. That is set to change with the most volatile period of trading for the year upon us. The fall is typically one of the more exciting times of the year as trading volume and volatility rises, even if the market remains strong and no major risk-off event unfolds. The Labor Day holiday in the US (observed yesterday) is the unofficial end of summer as market participants return back to their desks during the week or so after.

The current technical structure going back to the late June lows continues to remain pointed higher, despite the lack of direction in recent weeks. We should soon see a resolution of the horizontal price action as volume picks up.

Giving the uptrend into record high territory the benefit of the doubt, the sideways chop is currently viewed as a consolidation period before another leg higher. The price action over the past three weeks is taking the shape of a bull-flag on the verge of breaking.

The bull-flag has been developing within the construct of a differing angled set of parallels which entails all of the chop going back to the middle of July. A break higher will likely find resistance at the upper parallel in the 2205/10 vicinity.

Should the market roll over from here, we will be on alert for a new closing low below the Thursday low at 2156, and more importantly the 8/2 low at 2147. A break below the latter of those two levels would usher in the likelihood of seeing a decline below the old record high in 2015 at 2137 and expose the trend-line off the Feb 11 retest low.

Until the market can break free in either direction in the coming days, we will continue to patiently wait. As stated earlier, though, the trading should begin to pick up as we head further into September and opportunities are likely to begin presenting themselves in larger numbers than in recent weeks.

Find out what make characteristics profitable traders have in our free trading guide, “Traits of Successful Traders.”