The New Zealand Dollar hasn’t had a great month of May thus far, and shifts across global financial markets in recent days following the April US non-farm payrolls report and the April US consumer price index have catered to a general ‘risk-off’ mood. And while this has left the high beta, growth-sensitive New Zealand Dollar exposed to a near-term pullback, that doesn’t mean that the Kiwi isn’t in good shape longer-term. Technically speaking, both NZD/JPY and NZD/USD rates remain within their triangular consolidations; if the Kiwi’s wings have been clipped, it’s just a flesh wound (and not in the ironic Monty Python sense).

The recent pullback in NZD/JPY rates is fairly insignificant; in fact, it was on Monday this week that the pair just set a fresh yearly high. It thus may be considered that the pair has merely run into ascending triangle resistance and the initial bullish breakout attempt has been rebuffed. Overall, considering that the ascending triangle formed after an uptrend, the expectation is for bullish resolution ultimately. Despite the setback, NZD/JPY rates are pulling back into their daily 5-, 8-, 13-, and 21-EMA envelope, which otherwise remains in bullish sequential order. Daily MACD is narrowing even as it remains in bullish territory, while daily Slow Stochastics are just starting to ease from overbought territory. More losses may materialize within the ascending triangle; a break of the daily 21-EMA could foretell a drop towards 78.00 this week.

Given the uptick in US Treasury yields, NZD/USD rates have proved weaker than their NZD/JPY counterpart. NZD/USD remains below its March and November 2020 uptrend, which constitutes the pandemic trendline. But like NZD/JPY, the pair appears to be consolidating within the confines of a triangle, this version of the symmetrical variety. The preceding move was an uptrend, so resolution to the topside is eyed. 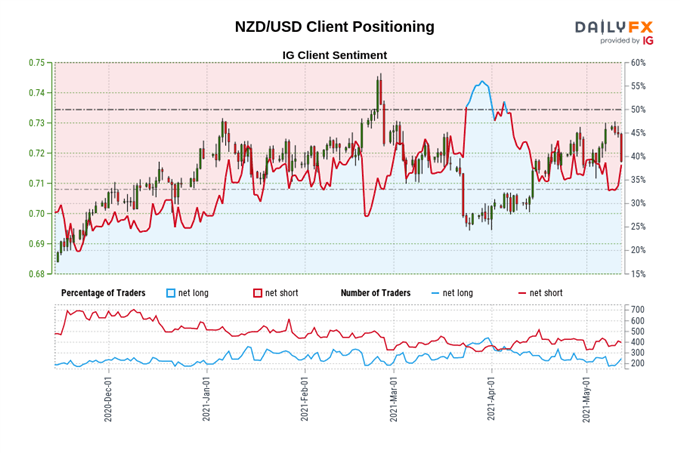