The Nikkei 225 has slipped like many other equity benchmarks this week as US-China trade tensions have bubbled back to the surface, with various Asian data points highlighting their impact on regional economies.

From a technical perspective the Tokyo stock benchmark’s slip has seen it break below a near-term daily chart trading range which had previously held the market for a couple of weeks. 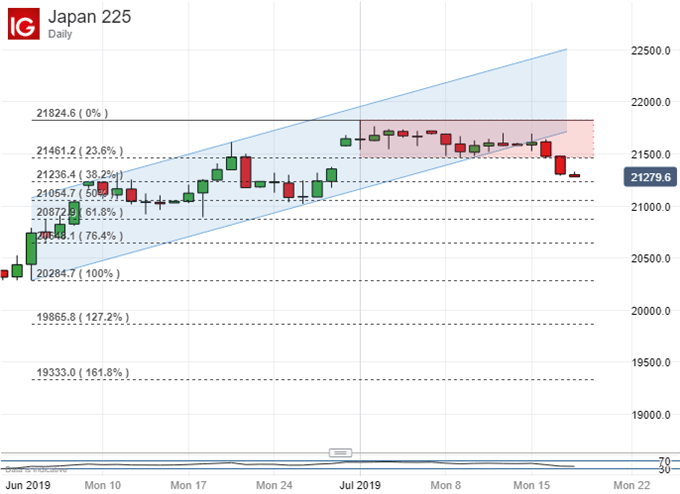 Since then the index has retreated quite sharply from that first retracement level, putting obvious focus on the second. That lies rather too close to the market for bulls’ comfort, at 21,236.4, a mere 38 points to the South, within easy reach of current daily candlestick ranges.

Still, there does seem to be a clear but modest range of support in that vicinity around which the market traded between June 10 and 28. Momentum still seems to be waning overall, however, which may mean that a slide down into that region is probably more likely than not now, even if it seems equally probably that falls will be limited to it in the absence of any bad fundamental news out of left field.

If the index can form a base there, the bulls will still have much work to do if they’re to claw back the last few days’ falls and get back to the 21,600 region which held sway before they started.

The ability to hold the index above that second retracement on a daily closing basis won’t necessarily be key to this, but it would be a good gauge of their current resolve and may be a good test of appetite for the rest of the week.