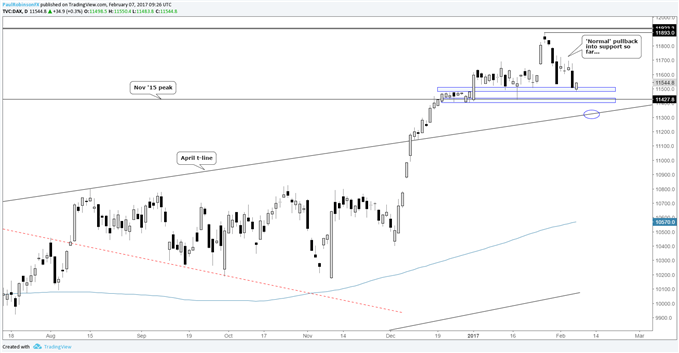 In Friday’s post, this is what we had to say regarding the DAX over the short-term: “The market needs to soon turn up, or else faces further downside risk…The market is pausing for now, but after every pause comes a move.”

After three days of meandering sideways, the market made a move on Monday, taking a 1.2% hit. The trend off the late-January highs is pointed lower, while the longer-term trend is pointed higher; there is still risk to the down-side, but as long as support holds nothing will be lost on the longer-term uptrend. With that said, there is support from here down to near 11300.

The area surrounding 11510/480 has been in play since December – once as resistance, now support. There was a jet below this zone on an intra-day basis on 1/17, but the market recovered by day’s end to maintain the ~11500 area. We’re coming off the low-end of our first noted support zone in early trade today, making this the first real test of support in a while. Should we see buying pressure fizzle out we’ll look to an area not far below in the vicinity of 11425/00 as our next zone of support. Below there lies the top-side trend-line running back to April; this line clocks in around 11330/20.

All-in-all, the DAX may continue to decline from here, but so far it looks corrective in nature and not the beginning of a significant reversal. Global risk appetite has yet to show any major signs of cracking, and as long as we don’t see anything highly disruptive the German stock market is likely to continue to hold a bid.