GBP/USD Reversal Continues After Resistance at Prior 1.4000 Support

- The reversal in the British Pound continues after last week’s March inflation numbers out of the UK. While there is still a possible rate hike on the horizon in a couple weeks at the BoE’s ‘Super Thursday,’ the rest of the year is very much in question as to just how hawkish the BoE might be.

- Sellers remain in-control of near-term price action, and the move in GBP/USD is being driven by both a week British Pound and a strong US Dollar. The longer-term bullish trend that started last year still remains alive; but it may stay on hiatus for a while longer.

Last week saw quite a bit of volatility in the British Pound. The currency was surging-higher from the beginning of April and, to a lesser degree, since the early part of March. Markets were pricing-in the prospect of a hawkish tilt at the Bank of England as inflation continued to run well-above the BoE’s target of 2%. Inflation crossed the 3% marker in 2017, and that continued with the January inflation print out of the UK. But in February, inflation started to slow. Market participants remained cautiously optimistic that that inflation dip might be a one-off or, as former Fed Chair Janet Yellen used to opine, ‘transitory’.

But in March we saw another fall in inflation numbers, and this brought a bit of reality to the trend. Inflation is softening even though we’ve only seen one hike out of the BoE, and this may remove the need for the bank to retain a hawkish stance as we move deeper into the year. While a rate hike at the bank’s next Super Thursday is still very much a possibility, the idea of getting more than one hike in 2018 is considerably less-likely should rates of inflation continue to fall.

That inflation print not only dampened the previously bullish trend, it helped it go into full-on reversal as we’re now trading at fresh monthly lows. 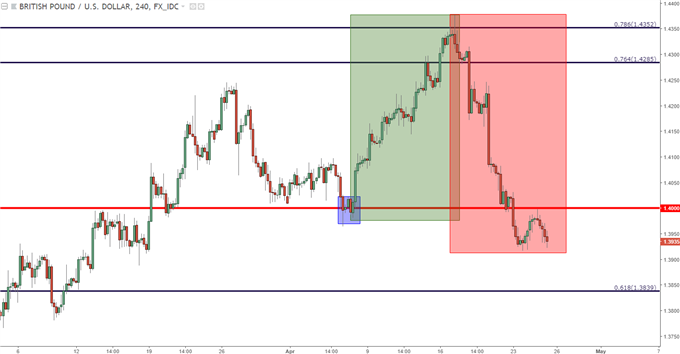 Earlier in the month, we looked at a support setup off of the area around the 1.4000 psychological level, and that setup came into play around Non-Farm Payrolls. That shift of strength in the first couple months of April drove prices up to a fresh post-Brexit high, with resistance eventually showing at the 78.6% Fibonacci retracement of the ‘Brexit move’ in the pair.

But after last week’s reversal prices sank back-below 1.4000, and we’ve seen a bit of resistance show at that area of prior support; leading to the possibility of bearish continuation of this short-term trend. At this point, a break below this morning’s low at 1.3916 would make the prospect of bearish continuation a bit more attractive, leading to an additional bit of confirmation that the 1.4000 high from today will function as the ‘lower high’. 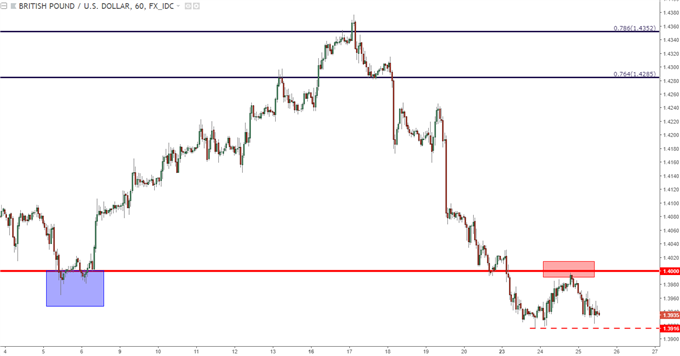 Below current price action are a series of interesting levels for that next stop of support. At 1.3888, we have a swing-low from mid-March, and a bit deeper at 1.3839, we have the 61.8% Fibonacci retracement of the post-Brexit move. If this can’t hold, then prior swing-lows at 1.3780 and 1.3710 are exposed for next possible areas of support. 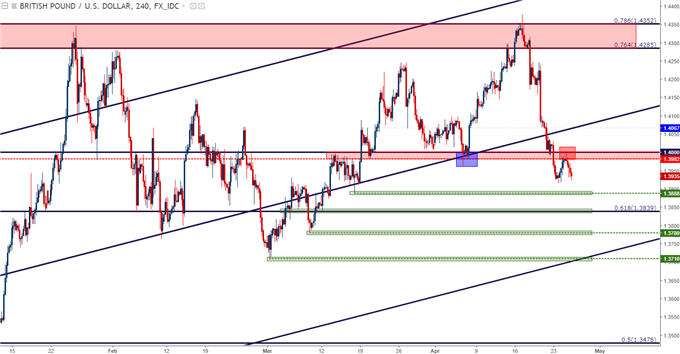 The bullish view on the pair would currently be driven by patience; letting this retracement run its course until a support area comes into play that could help to re-establish a bullish stance. The topside channel that started last year is still very much alive; but we may need a deeper retracement before that bigger picture trend is ready to resume.

The level around 1.3839 could be especially interesting for this scenario as this is the 61.8% retracement of the same Fibonacci study that helped to mark the high. If we do see some support beginning to show here, the door re-opens to bullish strategies in the pair. 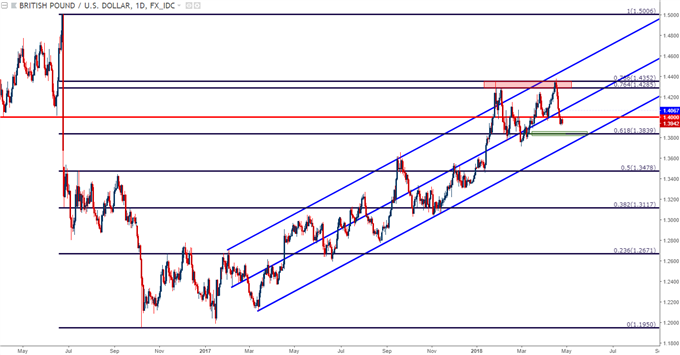