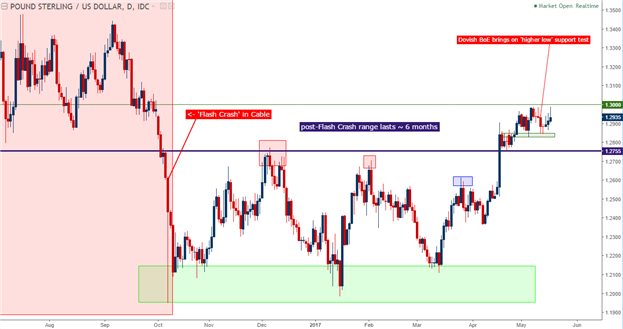 In our last article, we looked at GBP/USD testing a ‘higher-low’ support level shortly after the Bank of England’s most recent ‘Super Thursday’ batch of announcements. At that meeting, BoE Governor echoed the familiar dovish tone that he’s personified since even before the Brexit referendum; and as has become usual, the British Pound dropped as the BoE assured markets that they were, at least at this point, unmoved by the prospect of higher rates of inflation.

What was different from prior dovish outlays from Governor Carney was price action in the Cable; as this round merely brought prices down to test ‘higher-low’ support, still above the resistance zone that had pinned the currency down whilst in the range that showed-up after the ‘flash crash’ in October.

The Theresa May-fueled breakout in latter April is what initially helped price catapult above this resistance zone at 1.2775. Since then, we’ve seen one quick test below this level, with support showing just days after the initial topside break at 1.2755.

On the resistance side of the coin, the 1.3000 level is proving difficult to break, as we’ve now seen three separate attempts by bulls to drive beyond this area. This morning brought on another ‘higher-high’, albeit temporarily, as price action tip-toed deeper towards 1.3000 before sellers jumped-in on the move. But we did get a technical higher-high to couple with this recent formation of higher-lows on the hourly chart. 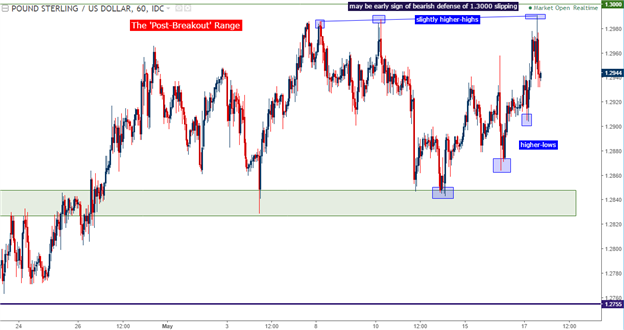 This can open the door for short-term momentum stances targeting the 1.3000 psychological level as a target. The prior swing-low around 1.2900 could be used for risk outlay to offer a slightly better than 1-to-1 risk-reward ratio up to the 1.3000 big figure.

Alternatively, those with intermediate-term, swing-trading stances can look to place stops below the ‘bigger picture’ swing low around 1.2829; while traders with a longer-term outlook would likely want to look to nest stops back below ‘post-Brexit’ resistance of 1.2750. 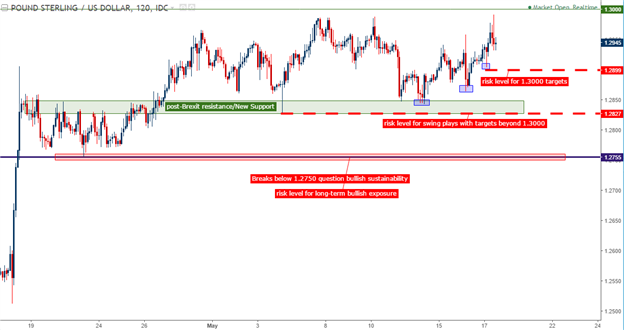