GBP/USD Technical Analysis: Is a New Trend Setting In?

In our last article, we looked at the shifting paradigms in GBP/USD after last week’s Super Thursday batch of announcements saw the Bank of England remove the dovishness that was continuing to drive the Sterling lower. By acknowledging that higher inflation is being expected in the U.K., the bank effectively warned markets that additional rate cuts may not be in the cards, and ever since, Sterling has traded with a rather aggressive bid.

Of particular interest is the fact that this week’s price action has seen strength in the U.S. Dollar, yet GBP/USD has still run to higher-highs; indicating that even though the Greenback has been getting accumulated, the rate of buying in GBP has been even stronger and more brisk. This could setup a fairly attractive scenario should USD find an element of weakness so that stronger bid in the British Pound could drive prices on the pair higher.

Now that we have the possibility of up-trend continuation, traders would likely want to look for support to develop before triggering long, and there are a series of levels to watch for in the early portion of next week for that support to begin to form. At 1.2087, we have the ‘post-Flash Crash swing-low,’ and if prices fall below this level, that would invalidate the bullish bias as lower-lows would be printing. A bit higher at 1.2328 we have the swing-high from mid-October/early November, and this had given the most recent swing low along with support during the reversal around U.S. Presidential elections. But the more attractive area for that higher-low to develop would likely be the zone around 1.2500 in the pair, as this is a confluent level that had provided multiple points of resistance before the trend burst-higher; and as of yet this level has not been tested for support after the breakout.

Given recent strength in the Greenback, that support could come into play fairly quickly; and stops on potential long positions can be cast to the deeper swing low in the effort of catching the next swing-higher. 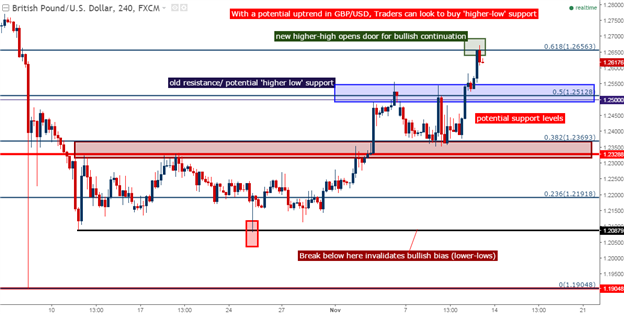