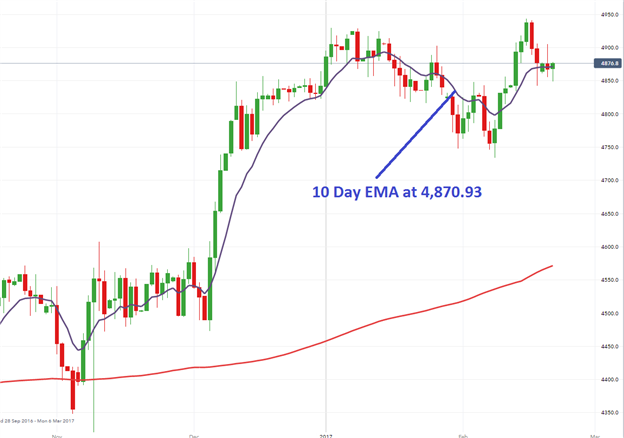 CAC 40 is attempting to trend higher this morning, and now up +0.24% for today’s session. European markets as a whole are trading higher as well, with little data on the horizon for this week’s economic calendar. Top winners for the CAC 40 include Engie SA (+1.35%) and TOTAL (+1.32%). Losers for the session include Unibail-Rodamco (-0.75%) and Essilor International (-0.60%).

Technically, the CAC 40 has been range bound. The Index has been trading on its 10 Day EMA (exponential moving average) for three consecutive sessions. This average is found at 4,870.93 and traders should look for a definitive breakout of this line to help determine the markets next short term trend. Traders should note that the CAC 40’s long term trend remains pointed upward, with the Index well above its 200 Day MVA (simple moving average) found at 4,571.46.

Intraday the CAC 40 is trading back at its central pivot, after initially bouncing from support found at today’s S1 pivot at 4,847.10. A move above the central pivot at 4,876.30 may be interpreted as bullish, then exposing points of intraday resistance. This includes today’s R1 and R2 pivots, found at 4,896.90 and 4,926.10 respectively.

It should be noted that if prices turn lower later in today’s session, a breakout below the S1 pivot exposes the CAC 40 to new weekly lows. At which point, the next values of support would include the S2 and S3 pivot found at 4,826.50 and 4,797.30. 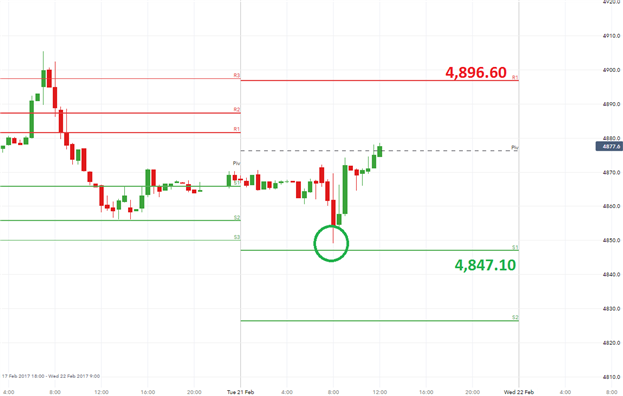