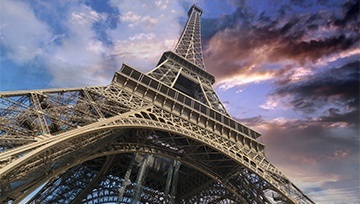 EUR/JPY Continues Descent Ahead of ECB

- EUR/JPY continues to fall after a strong start to Q3. This further complicates longer-term stances in the pair, as the 2017 strength was reversed from February thru July. More recently, bulls have come back, but a steady stream of losses over the past week further brings the prospect of bullish continuation into question.

- The next few trading days are loaded with risk for EUR/JPY. Tomorrow brings the European Central Bank for their first rate decision since the announcement of stimulus-taper, and Monday night/Tuesday morning brings the Bank of Japan at a rate decision in which rumors have started to float that the BoJ may unveil some new information pertaining to their stimulus program.

It’s been a binary start to Q3 so far for EUR/JPY, as the pair started off the quarter on a bright note, bouncing from 128.50 up to the 132.00 level in the first couple weeks of July. But since last Tuesday, prices have been pulling back and we’re getting very close to having erased the entirety of the topside move that started earlier in in the month. Last week we looked at the potential for support to develop at two key areas on the chart. And while the pullback did slow as each of those zones came into play, buyers were unable to reverse the tides and prices continue to fall further. 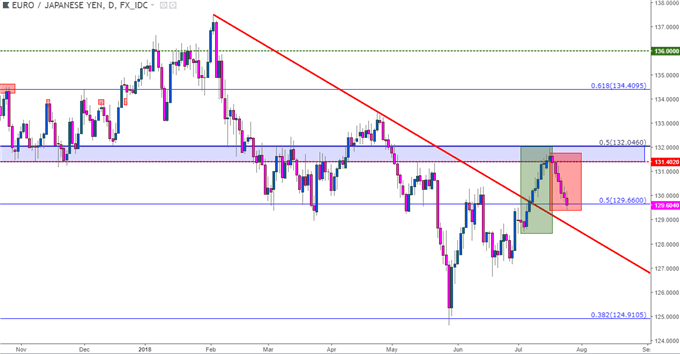 This is setting EUR/JPY up for tomorrow’s ECB rate decision. This will be the first such meeting since the bank announced their plans for stimulus-taper at the June meeting. And if that doesn’t invoke volatility in the pair, then the Bank of Japan is waiting in the wings for their own rate decision early next week. The BoJ is set to announce on Tuesday morning in Japan (Monday night in the US and the UK), and the recent item of interest is the prospect of the BoJ making an announcement or indication of something similar to what the ECB did in June. In a report that began to circulate this weekend, rumors pointed to a possible pullback in stimulus from the BoJ. This was refuted by BoJ Governor Kuroda, but Yen weakness has yet to return.

The big question around EUR/JPY as we trade deeper into the second-half of 2018 is which trend will end up driving towards the end of the year? The pair started a very bullish nine-month period in April of last year, running from below 115.00 to above 137.00. But the past six months haven’t been nearly as kind, as a combination of factors have moved in the spotlight to push the pair back-down to as low as sub 125.00.

As we came into Q3, it appeared as though the stage was set for a return of strength. But the past week of price action brings that further into question. 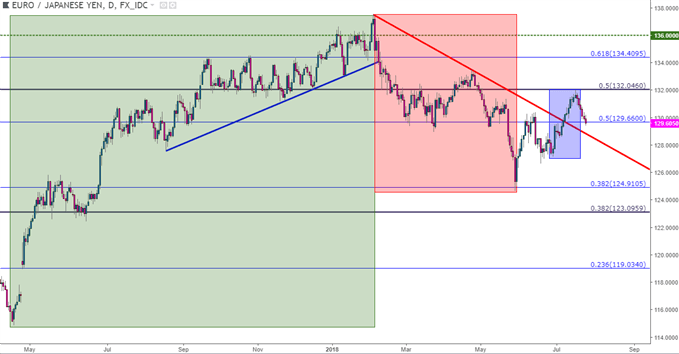 As we move towards two really big drivers in the pair with tomorrow’s ECB and Monday’s BoJ, the best course of action appears to be one of patience. While the bearish momentum that’s shown over the past week is promising, the prospect of that reversing into strength urges caution from chasing the pair lower. And on the long side of EUR/JPY, traders would likely want to avoid summarily discounting the past week’s price behavior as the sell-off has been rather consistent.

One item of note from a shorter-term observation is the fact that prices appear to be trying to catch support at a trend-line projection derived from a pair of swing lows taken from May and June. This would be a third touch of the trend-line, so nothing worthy of acting on yet, but if this can help to substantiate a push back above resistance around 130.35, the door could soon re-open to bullish strategies. Conversely, a bearish break below 128.38, which would likely need some help from the ECB and/or BoJ, and the door could re-open to bearish stances as the Q3 bullish theme would be soundly nullified. 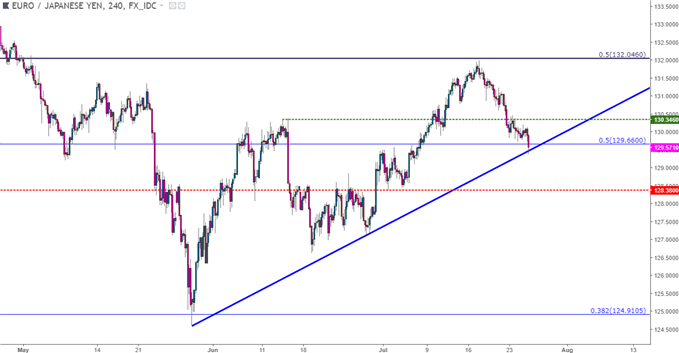