The ASX 200 remains quite comfortably within its dominant medium-term uptrend but a few warning signs are starting to appear.

The most obvious perhaps is that it’s not quite as comfortable as it was last week, with that uptrend line now a lot closer to market levels and, therefore, at greater risk of test. 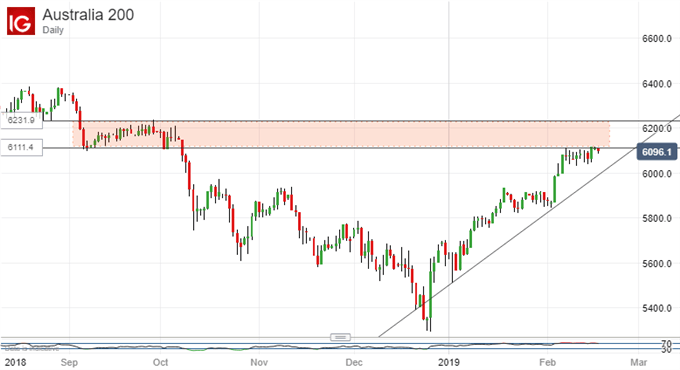 But that might not be the gravest warning. It may be more worrying that the key resistance zone I identified last week remains too much for the bulls. The zone comes in between 6111 and 6232 and it bounded trade between September 6 and October 8 last year, before the long plunge down to the lows of late December.

Now it stands in the way of making back yet more of those falls, and the bulls haven’t been able to crack it despite two weeks of trying. They may simply need time to consolidate. The ASX’s Relative Strength Index looks elevated and suggests a degree of overbuying.

If the index can hold on around current levels while that state of affairs cools down. then that might in itself be a moderately bullish signal. Indeed, it would probably presage a foray into that resistance band, if not a trip above it.

However, the uncommitted might want a bit more proof that consolidation is really all we are looking at, rather than something more sinister such as the start of a process of topping out. Keep a close eye on this week’s daily closes. If the index can nose up into that resistance zone and remain there then it might be as well to play for some more upside.

If it can’t then it could be time to increase downside protection, perhaps at least.