The ASX 200 has risen to four-month highs with the fundamentals very much in the driving seat.

Signs last week that the US Federal Reserve will probably be much more cautious in raising interest rates this year helped stock markets worldwide. On Wednesday the Reserve Bank of Australia provided the ASX with domestic support of a similar kind when governor Philip Lowe said that the outlook for rates was now more balanced- previously the central bank had suggested that a rise was more likely than a cut.

Technically speaking the ASX has been lifted above its previous daily chart range by three consecutive sessions of gains. 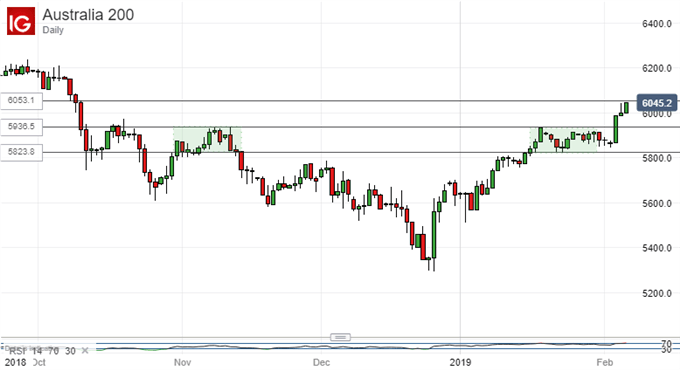 From the chart above it’s clear that the bulls have now made back much of the sharp falls which came between October 5 and 11 last year. The top of that slide is now in focus to the upside. It comes in at 6174, still some way above the market.

The bulls will probably need to get there and show some ability to consolidate their gains on a weekly closing basis before attempting to retake last year’s multi-year peaks above 6,300. This looks like a big ask in what remain fundamentally jittery markets, but the more restrained monetary policy tone now audible across the world is certainly providing valuable fundamental support.

Should it fade, the former trading range it likely to arrest any near-term falls. It comes in between 5936.5 and 5823.8. A sustained slip below that would indicate that the bull thesis was in trouble but that is not expected in the near-to-medium term.

Focus will probably remain on those important highs from October and September last year, even if progress toward them is gradual.

Whether you are new to trading or an old hand DailyFX has plenty of resources to help you out. There is our trading sentiment indicator which shows you live how IG clients are positioned right now. We also hold educational and analytical webinars and offer trading guides, with one specifically aimed at those new to foreign exchange markets. There’s also a Bitcoin guide. Be sure to make the most of them all. They were written by our seasoned trading experts and they’re all free.