Trade the data live and interactive with the DailyFX webinars. Join us and join in, we’d love to have you along.

Those of you who follow the adventures of the Australian equity benchmark can’t fail to have noticed that it has been trapped in a very tight, 160-point trading band since May. This is on a daily-close basis, of course, there have been intraday forays above and below that area but even they are uncommon. I count just seven since May. 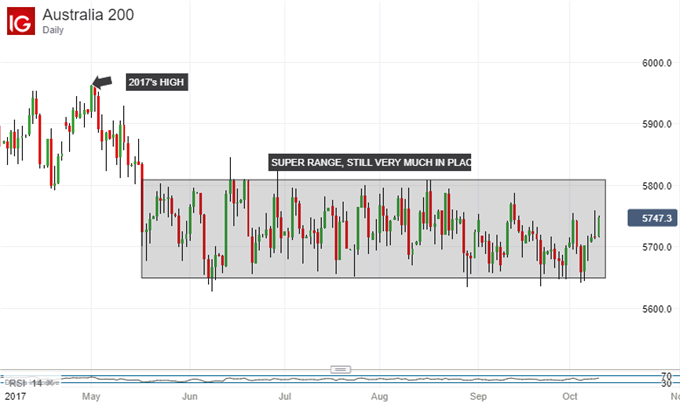 What I’ve taken to calling the Super Range saw its lower bound come under a little pressure last month. But the bad news for anyone hoping for a downside break at long last is that that pressure has already been dispelled in October. Last Thursday’s bounce has put the ASX in quite a steep little short-term uptrend which has left the range base at 5649 or so comfortably far below current levels.

Of course, it is overwhelmingly likely that the bulls haven’t got much higher to go and that the current rise will peter out well before it gets near the range top. That’s even if it gets beyond the last significant peak which was September 13’s closing high of 5769. 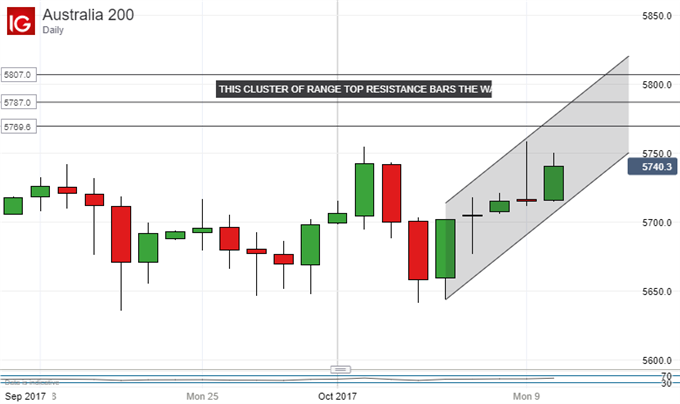 The bottom line of course is that one day even the Super Range has got to break. And it will be absolutely fascinating to see what brings this about. However, it has now endured two quarters of the position squaring which often comes at such times without even breaking sweat. And there is nothing in terms of momentum or moving-average action to suggest that a break is imminent. Indeed, the ASX 200’s moving averages are in orderly array, making the status quo likely to endure.

So the best advice looks like being what it has been for five months: assume that the Super Range is all you have to play with.