Just getting started in financial market trading? Maybe just thinking about it? We wrote the DailyFX Beginners’ Guide for you.

There’s a sense in which ASX 200 technical analysis almost writes itself.

On a daily closing basis, the Australian equity benchmark has been locked in a tight, 160-point band since May. There have been occasional intraday forays above or below, but not one of them has stuck, and the ‘super range’ endures. 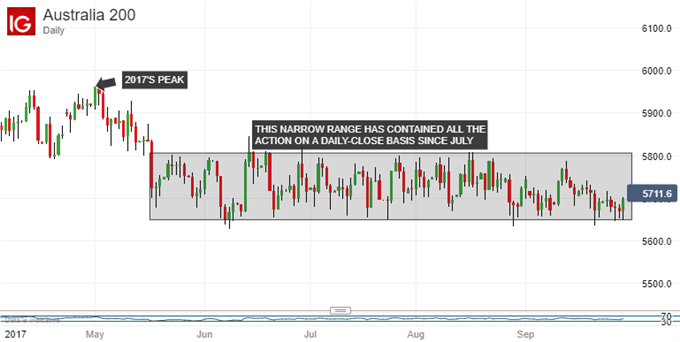 With that range now venerable, and neither the momentum indicators or the moving averages screaming for a change, it would probably be a brave investor who’d play for a break at this point. However, if you zoom in on the last few days’ trading it’s clear that the range also remains under a bit of unaccustomed downside pressure. 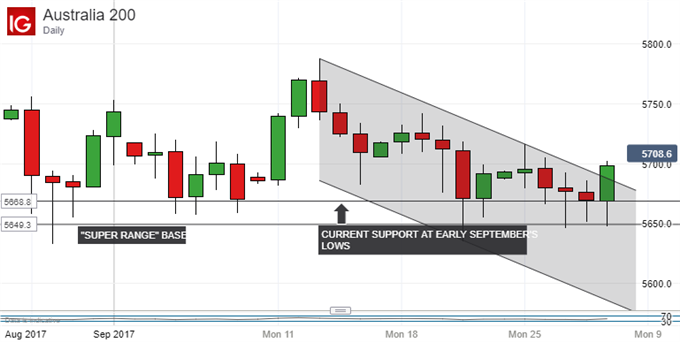 Admittedly, it has snapped a two-week slide from September 12’s high, but that peak itself was a “lower high” than the previous significant top – August 22’s 5876. Indeed, within that super range the index has been steadily making lower highs since mid-August.

For now, the range base seems still seems very well defended. Well, it probably would. Investors have seen months of bounces there. The latest came just above it, at September’s lows. They are in the 5670 are, whereas the super-range base is at 5650. Still, without another convincing push higher the parade of lower highs will continue and that base will come under ever more concerted attack.

To be clear, the super-range is still very much with us, and there are no clear signs suggesting any decisive break. But the last month’s trading action suggests that, when it does come, that break will be to the downside.

It’ll take a push above September 12’s top at 5783.5 to forge a higher high and negate that prospect.