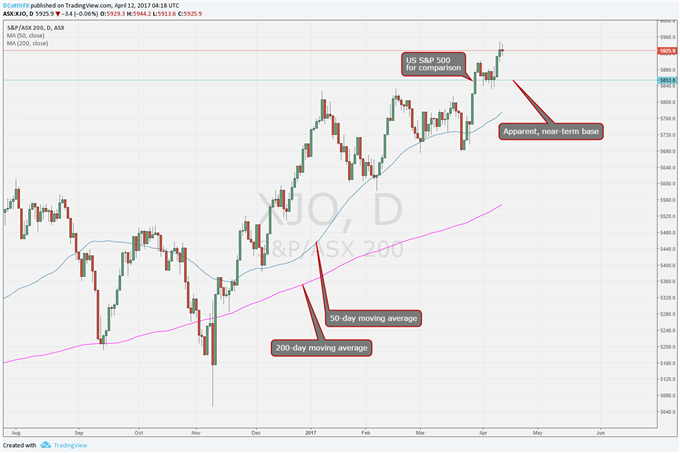 Technical Analysis: Battling ASX 200 Hangs On Up There

Already at its peaks for 2017 when I last took a technical look at it on April 6, the index has pushed on again to new levels not seen since early 2015.

And there are reasons to think it can stay up here.

For one, the shorter-term 50-day moving average remains comfortably above the longer 200-day version. There’s no sign whatsoever of the gloomy ‘crossover’ which can signal a trend change here as indeed the last time it happened for the index, back in May 2016.

For another, both averages continue to slope nicely if more gradually upward. That is another hopeful sign for the bulls, if not a conclusive one.

The ASX also appears to have consolidated, at least to some extent, at these higher levels. The 5853.8 point has provided it with a reasonably solid base in the past ten sessions or so.

However, the benchmark is also now pushing up into highs where it has not been comfortable for very long in recent history. As this chart shows its last foray was back in 2015, and it was short one indeed. In the current febrile global investment atmosphere, the chance of this being a longer stay must be at least questionable. 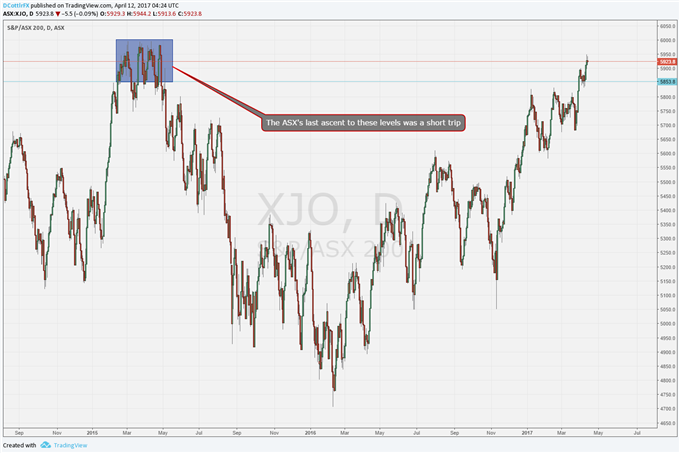 The ASX’s strength has also looked like a bit of an outlier at times, with the likes of the Nikkei 225, for example, sending rather more mixed signals.

This needn’t be bad news for the battling Australian index of course. But keep a close eye on that near-term base. If it can hold, then more cautious optimism would seem justified

If it gives way then we could be back to 2017’s range trade very soon.