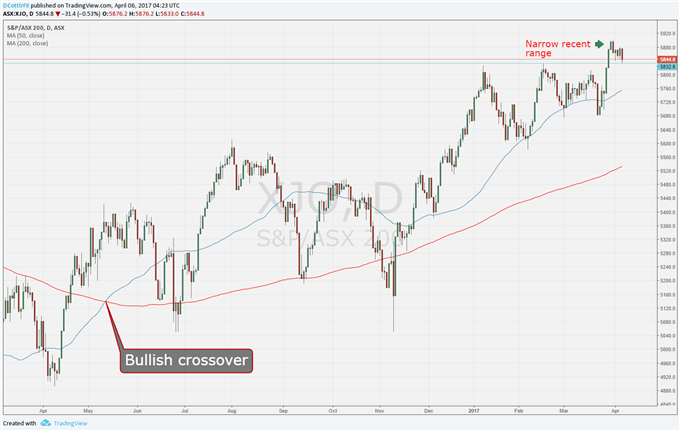 Australia’s ASX 200 equity index has risen to new two-year highs in the past week or so, raising the obvious question: can it stay up here?

The index has certainly held its ground since peaking at 5900 on March 31. But the range traded since has been a wafer-thin 68 points or so, which doesn’t suggest huge conviction. At its current 5840 the ASX is also way above both its 50- and 100-day moving averages, as can be clearly seen in the chart below. This might also be a worry for those who hope it can survive and even thrive up here.

Still, it’s equally clearly been this far above those averages before in its climb up from the lows of late 2016, and that fact has been no barrier to further progress. Moreover, the bullish crossover which took place in May 2016, when the 50-day topped the 200-day, has not yet been reversed. Even though we came quite close in mid-November, the 50-day remains on top, as bulls would want.

Both averages remain in obvious uptrend, too. In short there would seem scope for cautious bullish optimism here, even at what for 2017 are elevated levels.

However, to really convince the index will have to consolidate more clearly. And it’s not doing so. Currently below the closing level of the past five trading sessions, the index is looking at the short-term supports of 5820.3 and 5745.6, the March 28 and 27 closing levels, respectively.

And if we return to those levels then the most recent rise will start to look spurious and a return to the year’s broad trading range will be the most likely outcome, only with yet another rejected push higher in the record.