After forming what appeared to be a bullish Pennant between mid-March and early-May, USD/MXN broke down and proceeded to decline almost 10 percent before bouncing at 21.4134. From there on it traded in a relatively directionless manner until recently. Over the past few days, USD/MXN punctured support at 21.4134 with follow-through. 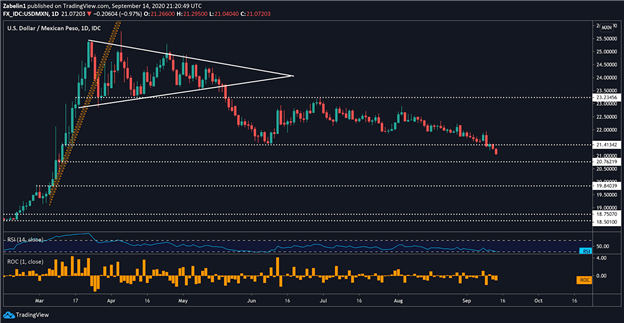 Looking ahead, the next obstacle to clear may be the floor at 20.7621 where the pair experienced some friction during its ascent in early-March. If that too is broken, selling pressure may swell and push USD/MXN lower with an eye at 19.8403. The pair’s weakness appears to be in large part the function of a weaker US Dollar rather than the result of Mexican Peso strength.

Having said that, apart from the last week or so, strong risk appetite has boosted the appeal of relatively risky assets - like those associated with emerging market economies. This dynamic may have also played a role in punishing USD/MX. However, if sentiment turns sour, the pair may trim its losses.

The aforementioned dynamic may also apply to USD/KRW. After topping at an 11-year high, unlike USD/MXN - which went through a brief consolidative period - USD/KRW quickly retreated. The pair has been guided lower by descending resistance dating back to the March-top and has recently been pushed lower after attempting to clear it over the past two weeks. 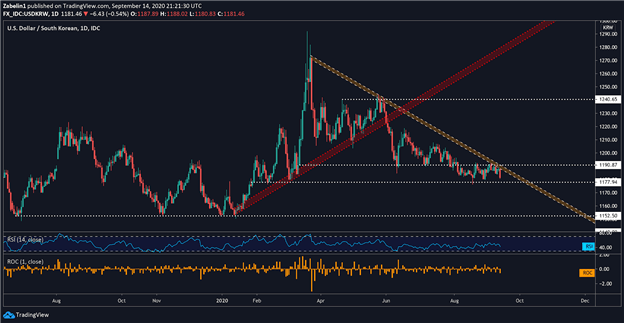 Looking ahead, as the space between the slope of depreciation and support at 1177.94 narrows, USD/KRW will have to decide on a directional inclination. If resistance holds and the floor breaks, the pair’s decline may accelerate. Conversely, a break above the descending ceiling with follow-through may precede a buying bout.