First, is Tesla a bubble?

The simple answer to this question is, in my opinion – yes. In Tesla’s 17-year history it has failed to deliver profits in a one-year period. Last year it lost $4.92 per share. Despite unprofitability, since the stock began trading almost a decade ago, it has risen over 4500%, with 400% tacked on since just June of last year.

Calling it a bubble is of course a bit more complicated than just saying the company is all style and no substance. Advances like this don’t happen for no good reason, there is always a compelling reason, whether it is proven valid or not. Tesla is a “disruptor” – investors are buying the stock for its potential (to revolutionize the auto industry), not for what it can do right now (make money).

So, while it is quite possible Tesla is the automaker of the future (and can make money doing so); the price action, especially of late, smacks of classic bubble behavior. The rise over the years has been impressive, but its dramatic rise over the past few months and days, looks to be completely unsustainable.

From last Wednesday up until the intra-day high yesterday, TSLA rose 67% with the perfect combination of a good old-fashioned short squeeze and “FOMO”. This is the kind of panicky behavior you typically see towards the end of a run when an asset is in the “blow-off” phase of a market cycle.

It’s possible we have seen, or are within days of seeing a significant top. Yesterday’s long-tailed Doji formation marked a session of high volatility with the end result from open to close, effectively equating to a “tie” between both sides of the market. A pattern of exhaustion.

If indeed the end is here or near, we should soon see a sharp break. Then, oftentimes in these situations, the initial collapse is followed by an attempt to rally back (“bull trap”), only to be followed by failure and a deep protraction in price that wipes out, at a minimum, the last leg of the rally. In this case, that would potentially take TSLA’s share price back down to around $250-300.

Following any deep retrenchment, where it goes – well, that will depend on Tesla’s ability to have its substance match its style. With that said, Tesla may very well be a great long-term investment, but at this time it looks like at these prices it could spell trouble for anyone chasing the stock.

For those looking to short, I’ll quickly share an experience of mine from many years back. Earlier in my career I was on a proprietary trading desk where I focused on trading the homebuilding stocks, a sector that was no question bubbling over. And a seasoned veteran once explained to me that catching the fall off the top isn’t where the ‘easy’ money is to be made, it’ll be after the stock is ‘broken’ and enters a stage of short-lived rallies that fail time-and-again. As it turned out, he was right. A more recent example of this is Bitcoin during most of 2018 following the initial crash. 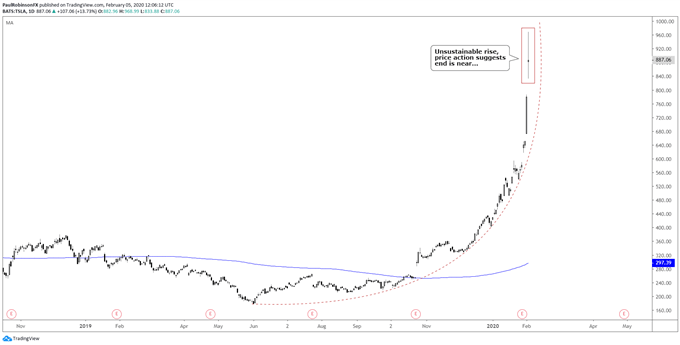