The recent move in Bitcoin below the 200-day moving average and the uptrend from the February 6 low casts a bearish shadow on the largest cryptocurrency. While BTC’s falls have been less than other tokens over the last 48-hours, the move may signal lower prices in the short-term although the longer-term uptrend remains in place for now. The 50-day moving average at $8,280 may provide some support, along with a cluster of trades between April 13 to April 20, although a sharp break and close below may negate the recent uptrend and threaten the April 1 low at $6,438. The 200-day ma, currently at $9,374 coincides with the 61.8% Fibonacci retracement at $9,385 and should provide resistance in the short-term. 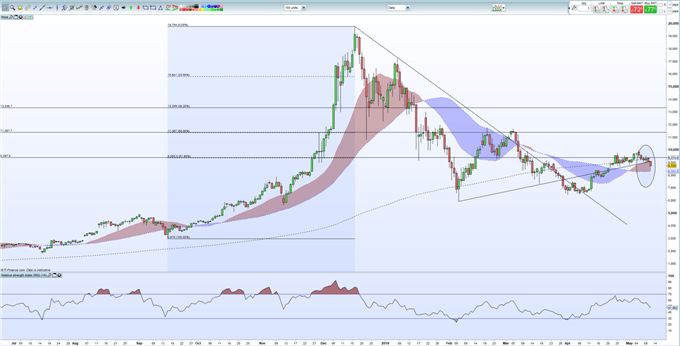 Another poor week for Ripple with the token falling from $0.84 to a current level of $0.675 as sellers dominate. We have discussed how the token, along with Ether, is supposedly being talked about by the SEC over whether or not it should be classified as a security – a negative outcome – and with little in the way of news flow, the bears still control price action. The February 13 swing high at $0.708 was broken easily, as was the April 25 swing low at $0.747, leaving a gap on the April 12 candle around $0.60 the next level of downside interest. To the upside, the previously mentioned $0.70 and $0.75 levels remain as short-term targets. IG Client Sentiment shows that traders are 26 to 1 long-to-short, while the RSI indicator shows the token in extreme oversold territory. 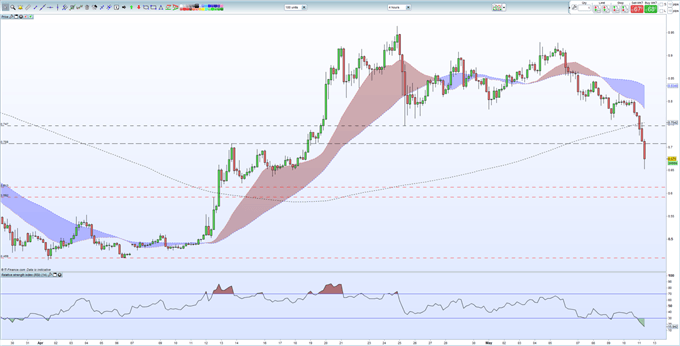 Another token hit by the general market sell-off, and the talk of SEC classification, Ethereum is nearing 61.8% Fibonacci support at $667 ahead of the 200-day moving average at $614.5. The cluster of trades in late April-early May that preceded the May 3 spike higher should also give the token support on the downside. On the upside $763 and $810 remain valid targets. As with Ripple however, any ruling either way on Ether’s classification by the SEC – or a denial of any ongoing classification meetings – will be the driver of Ether in the short-term. 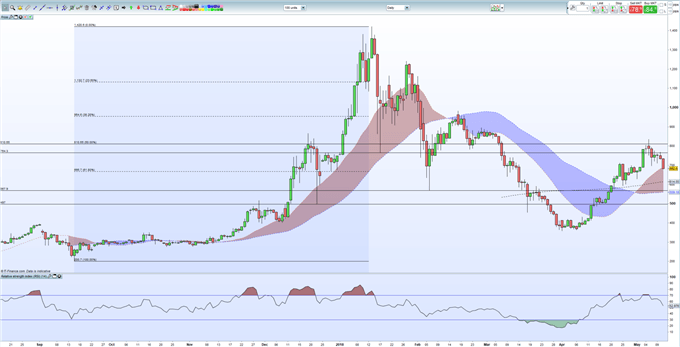 A sharp sell-off this week has pushed Litecoin into oversold territory, according to the Relative Strength Indicator, and on top of 61.8% Fibonacci retracement at $137 and the April 3 double top at $136. A break lower could see $125 tested. To the upside $146 and $155 provide the first two targets. 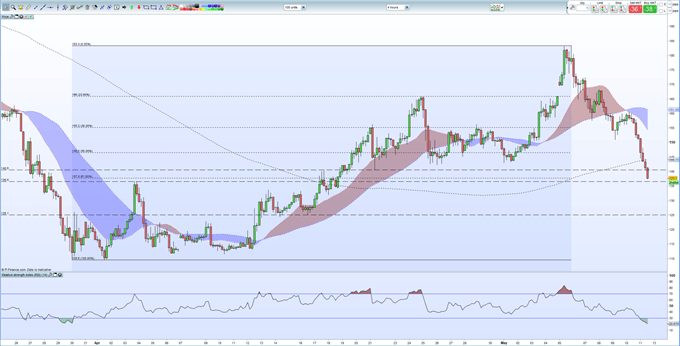 If you are interested in trading Bitcoin, Ripple, Ether or Litecoin we can offer you an informative Introduction to Bitcoin Trading Guide.