Bitcoin, Ethereum & Co. Hit Resistance, What Happens Next is Important

Cryptocurrency market at risk of major change in character

Last week, when we last looked at a few charts in the cryptocurrency market, we noted that they might be ‘broken’, and that the reversals on Wednesday could be short-lived. If indeed we see the bounce turn lower it could mark an important change in character from before.

What we’ve seen previously, is sharp down-moves met with aggressive buying, and in some instances an almost immediate return to heavy speculative buying. If, however, this time around we don’t see last week’s reversal grow legs, then the best days may very well be behind us.

It’s too soon just yet to say the run is over, but if price action doesn’t remain firm in the days ahead the likelihood that we are on the cusp of a broader move lower will quickly increase. Even if the speculative rise is over, though, volatility isn’t set to go away anytime soon, so there will be opportunities for the nimble trader for the foreseeable future.

Bitcoin sliced through the slope dating back to May, and tried to do the same with the July trend-line before swiftly reversing on Wednesday. This quickly brought an area of resistance into play, which thus far is keeping a lid on the bounce. Failure to sustain above 13k shifts focus back lower. If Bitcoin can trade above 13k, then we’ll be looking towards the top-side trend-line currently near 15k.

On a move lower the important level to watch is Wednesday’s reversal-day low at 9222. A drop below this threshold could cause buyers to start throwing in the towel, accelerating a sell-off.

Check out what retail traders are doing in Bitcoin on the IG Client Sentiment page. 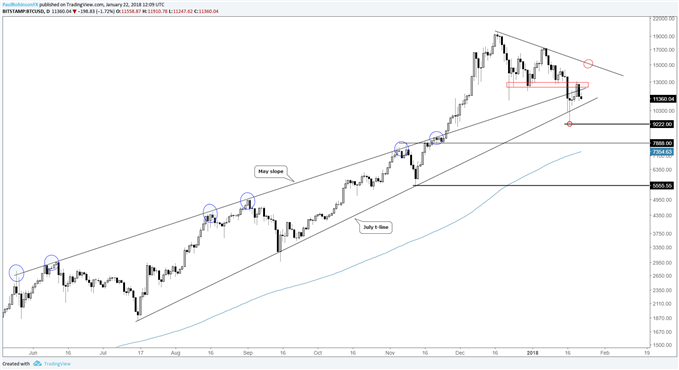 Ripple bounced sharply off the 87-cent level last week, but after doubling in less than two days it's starting to roll over. There is price resistance from a couple of prior day lows along with a trend-line off the record high. Stabilization here soon will be important if Ripple is to trade higher, or else it runs the risk of a larger decline; 87 cents will be the important level to watch. 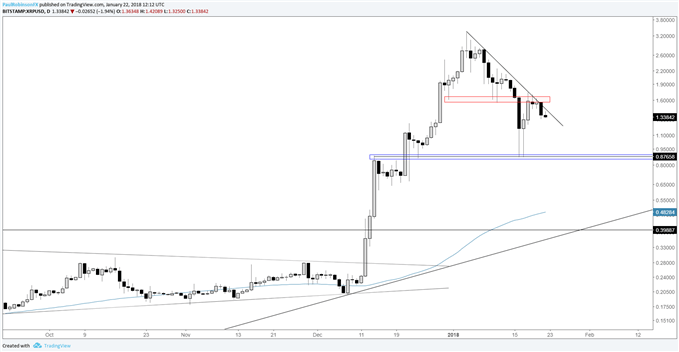 Can Ethereum continue to act as it did in December?

Ethereum is acting much as it did in December at this juncture, when the last short-lived swoon developed. So far, we've seen a similarly sharp bounce, and now it will look to try and demonstrate stability. If it starts to decline with momentum, a change in character will be in progress. This will bring the November trend-line into focus along with the 770-low from last week. A breakdown below the spike-day low and trend-line will have attention turned towards sub-500. 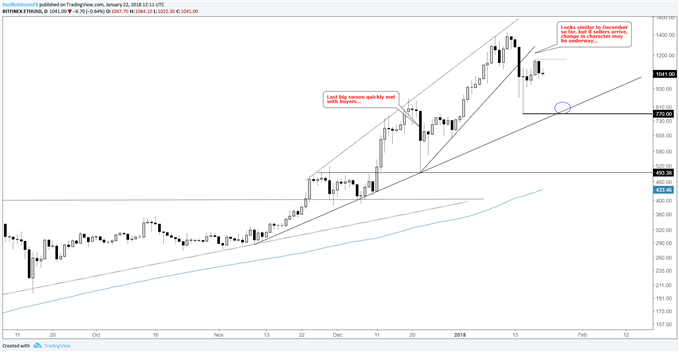 Interested in learning more? On page 4 of our Bitcoin Guide, we discuss the major fundamental headwinds for cryptocurrencies.