Looking for a longer-term view on AUDUSD? Check out our Q3 Forecast.

In the table below you will find implied volatility (IV) for major USD-pairs looking out over a one-day and one-week time-frames. Through the utilization of IV, we’ve calculated the projected range-low & high prices from the current spot price within one-standard deviation for specified periods. (Statistically, there is a 68% probability that price will remain within the lower and upper-bounds.)

After ratcheting higher for most of July, AUDUSD cooled its jets and is finding difficulty in breaking above a resistance zone penciled in from around 8060 up to 8160. This zone extends back as far as a key low formed in 2010. The reversal-bar off the bottom of resistance is proving to have been a solid sign of exhaustion so far and could mean even if aussie is to continue trading higher it may take some time before being able to do so. Yesterday we saw another rejection to trade higher following the RBA meeting (the central bank held on rates at 1.5% as expected). The one-week one-standard deviation projected high is at 8062, in almost exact alignment with the exhaustion-day high of 8065. This furthers the notion of seeing price trade below that threshold over the next week.

Looking lower, should we see the recent reversal gain traction lower there lies support around 7874 down to the April 2016 breakout level at 7835. Almost right in the middle of this zone falls the projected one-week low at 7856, and may indicate that support will indeed hold if sellers show up.

Overall, AUDUSD is set up to find difficulty gaing traction in either direction, suggesting one-week implied volatility priced at 9.3% could prove to be just about right.

Fundamental event alert: On Friday, the U.S. jobs report is due out, with expectations for NFP to come in at +180k compared to +222k the month prior. Look for any outsized deviations from expectations to shake up markets. Join us for live coverage of the jobs data as it hits the wires and a roundtable discussion with our analysts. Sign up here. 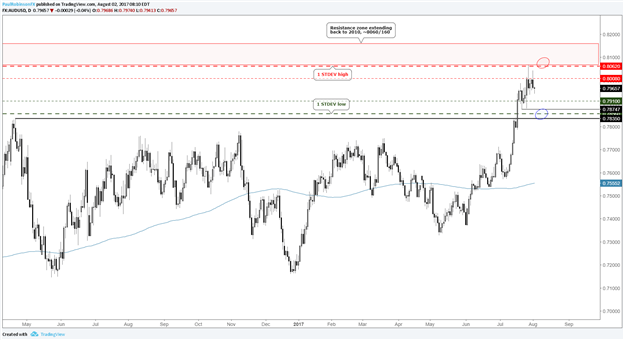