Looking for a longer-term view on NZDUSD? Check out our Q3 Forecast.

Below, we’ve noted implied volatilities for major USD-pairs for one-day and one-week time-frames. Through implied volatility, we’ve calculated the projected range-low/high prices from the current spot price within one-standard deviation for specified periods. (Statistically speaking, 68% of the time price should remain within the lower and upper-bounds.)

Last week, NZDUSD easily blasted on through resistance in the zone surrounding 7350. The trend is clearly higher along with its sibling currency pair, AUDUSD, and as such the path of least resistance upward won’t be easily reversed in either. The preferred way to enter is via a pullback, and most ideally at a level or zone of support. Kiwi has sound horizontal support in the 7350-vicinity along with a trend-line rising up from May; these align with the one-standard deviation one-week projected low of 7339. If the recent leg up is only the beginning of another sizable run higher like the one seen in May/June, then we might not see a pullback develop into support. But if it does, it could be a good low-risk, high-reward entry for longs. Overall, barring a major turn of events it looks unlikely we will see NZDUSD drop below noted support.

Looking higher, the one-week projected range-high is above the September high and well below major levels of resistance carved out in 2015 just over 7700. This means there may be room to run, and should the projected high be overcome then the options market may be proven in the short-term to have underestimated kiwi strength.

Heads up: On Wednesday, the FOMC will release its decision on interest rates and with the Fed expected to hold pat on rates, focus will be on the policy statement and hints as to what the central bank will do at the meeting in September. 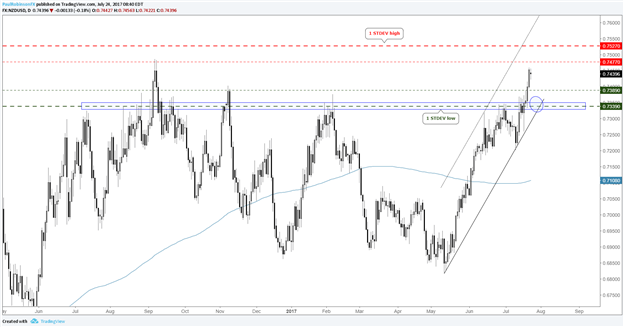