The Dow Jones FXCM Dollar Index (Ticker: USDOLLAR) initially rallied in the Asian session on the back of a weaker Japanese Yen once more, which based right below ¥101.00 and surged into ¥102.00 amid a pickup in the Nikkei, which is still recovering from its >10% selloff at the end of last week. However, with Europe fully back online – the UK had a banking holiday yesterday – traders have dumped the US Dollar in favor of the commodity currencies, the British Pound, and the Euro, though seemingly with no apparent catalyst in site.

Of note today, there are two issues worth focusing on. First, as has been pointed out over the past few days in various research notes (I was first directed to this issue thanks to Nordea Markets’ Aurelija Augulyte), ECB base money – excess liquidity has fallen to €270B, the lowest level since late-2011, and quickly approaching the ECB’s line in the sand of €200B. What this means is that the ECB is likely going to have to introduce new easing measures to fight the credit crunch starting to make its way back into the region. With the ECB meeting next Thursday, it is likely that we hear about new measures that could be implemented to help small- and medium-sized enterprises. While this might be economically positive, initially, the extra liquidity – currently unexpected – would need to be priced in, which is Euro negative.

The other issue today is the US Consumer Confidence (MAY) report due out at 10:00 EST/14:00 GMT, which might be the most significant US event risk on the docket this week. Consumer confidence is especially important considering it is a proxy for consumption, the largest component of the headline US GDP figure. Accordingly, with US equity markets holding all-time nominal highs, US consumers are likely feeling a bit more confident. Certainly, consumption trends have picked up despite the fiscal obstacles that are the payroll tax and the budget sequestration. 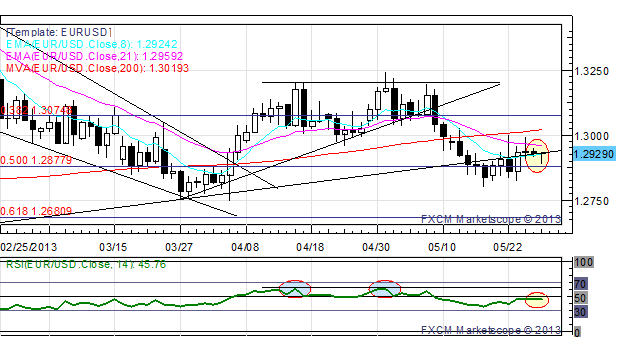 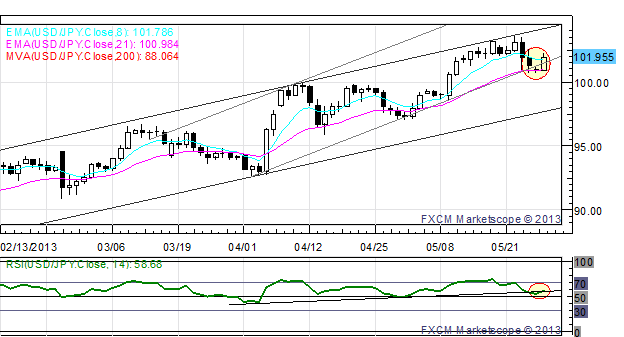 USDJPY: Price has attempted to retake ¥102.00 today, and trading in the European session has seen the USDJPY at least sustain gains around the level. Overall, price is relatively unchanged from Thursday, with the 21-EMA pacing the ascending trendline support off of the April 2 and April 31 lows as support. Additionally, with the daily RSI uptrend back in play, the corrective nature of the decline off the Wednesday highs suggests that another move higher could be in the cards. A further breakdown through trend support eyes a move towards 100.00, then 97.50. 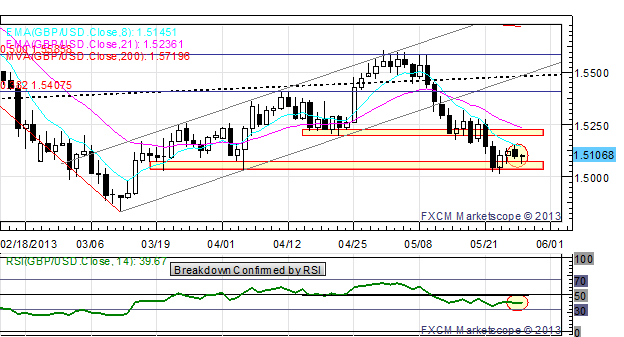 GBPUSD: No change: “The GBPUSD is back pressuring last week’s lows…the lower 1.5035 target was reached, and with the trade stretched to the downside, brief pause allowing the 8-EMA to catch up to current price could occur. I still prefer selling rallies towards the big picture move towards 1.4200.” Although a small Hammer has formed on the daily charts, there is evidence that a move back towards 1.5000 may be beginning. 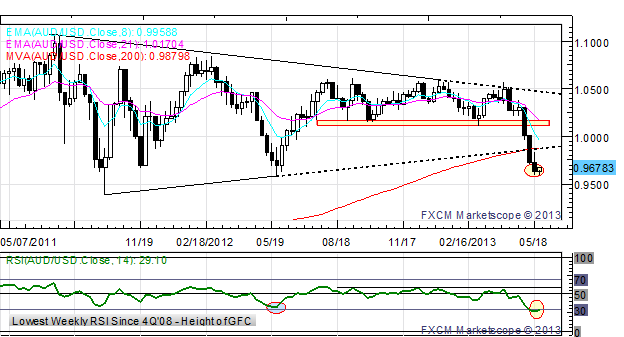 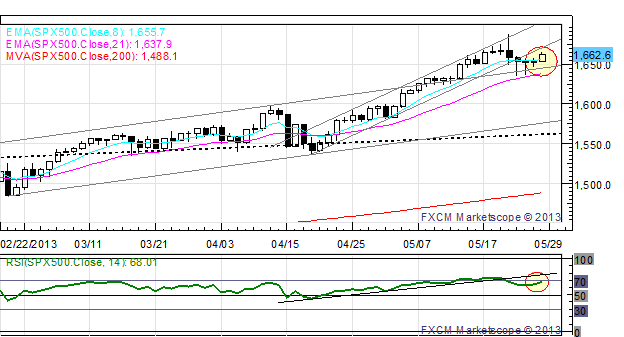 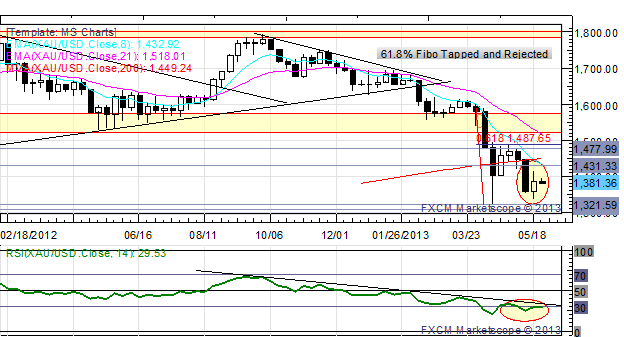