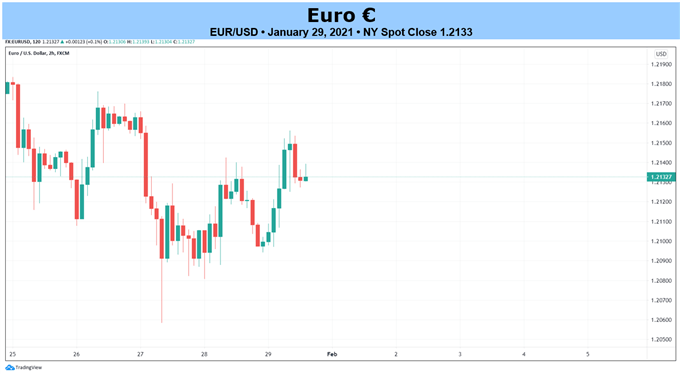 Technical Forecast for the Euro: Neutral

January was an exciting month for many reasons, and for the Euro, this was true to vary degrees, but mostly negative. Coronavirus vaccination rates have been incredibly slow across Europe, much slower than the UK and the US. With lockdowns ongoing, economic data remains sluggish, providing little reason for traders to lift the Euro higher. But then again, the Euro hasn’t made much progression or regression either: neither EUR/JPY nor EUR/USD rates moved in excess of +/-1% in January, while EUR/GBP rates were barely outside of this range, down by -1.02%.

The coming week may not have a European Central Bank meeting on the docket, but it has the two other most important events and/or data releases in any given month: a GDP report and an inflation report. 4Q’20 Eurozone GDP will be released on Tuesday, February 2, and like many other developed countries or regions, a sharp deceleration is anticipated relative to 3Q’20. Unfortunately for the Eurozone, the deceleration appears to have been so intense that the Bloomberg consensus forecast foresees the quarterly growth rate dipping to -1.2% from +12.5% while the yearly rate is due in at -5.4% versus -4.3%.

While the GDP report is covering old data, the upcoming Eurozone inflation report covers January. The release on Wednesday, February 3 will also come alongside the final January Eurozone PMI figures, and between the two, market participants will have a well-rounded view of the near-term economic environment facing ECB policymakers.

It’s worth noting that ECB policymakers have been trying to undercut the Euro exchange rate, having called for an exchange rate study to understand why EUR/USD remains so high despite the Federal Reserve running higher interest rates than the ECB, the US economy having higher inflation than the Eurozone, and the US economy growing faster than the Eurozone. Furthermore, ECB officials purportedly have suggested that markets are underpricing the odds of another rate cut in the coming months.

EUR/USD rates fell by -0.68% in January, with the monthly high coming within the first few trading days of the year. Since then, an intramonth downtrend has led to minor weakness but no significant technical damage, insofar as the pair remains above the September 2020 high as well as a cluster of both short- and longer-term Fibonacci levels.

EUR/USD rates are below their daily EMA envelope, which is in bearish sequential order, but the differential between the 5-EMA and the 21-EMA is but 4-pips, a sign that bearish momentum lacks conviction. Similarly, daily MACD has started to slip below its signal line, but without any vigor. Counter to these indicators, daily Slow Stochastics continues to rise towards its median line.

All things considered, this could simply be a period of digestion following the breakout from the July-December 2020 range, which formed after breaking the descending trendline from the 2008 and 2014 highs. 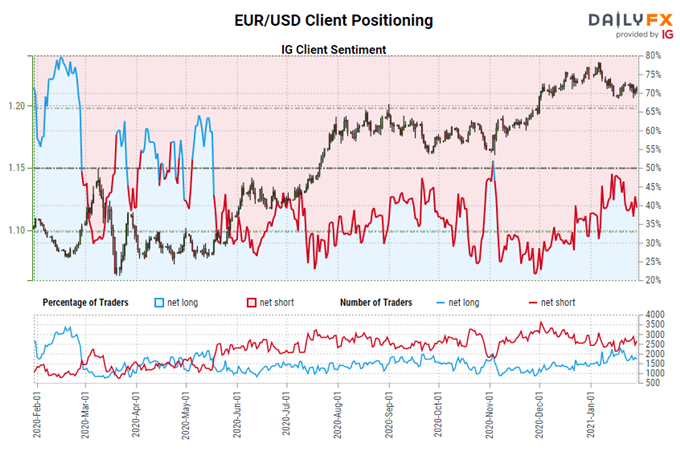 Unlike EUR/USD or EUR/GBP, EUR/JPY rates traded higher in January, adding +0.78%. The pair has traded back to a confluence of resistance, the rising trendline from the October and November 2020 lows, the area between the 2020 and early-2021 highs, and the rising trendline from the July 2012 and June 2016 lows (the last of which is the most important). Should EUR/JPY rates climb through this area over the coming sessions, it would be the clearest signal yet that the pair is turning through a long-term bottoming effort.

EUR/JPY rates are above their daily 5-, 8-, 13-, and 21-EMA envelope, which is in bullish sequential order. Daily MACD is rising above its signal line, having failed to make headway in bearish territory. Daily Slow Stochastics are leading the pack, surging through their median line in recent days. With equity markets showing resiliency despite volatility, EUR/JPY rates may have cross-asset tailwinds at their back. 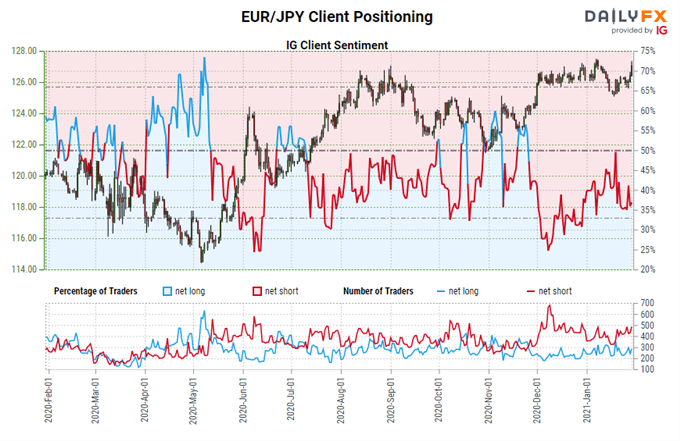 EUR/GBP rates settled lower by -1.02% over the course of the month, with the British Pound relieved of the burden of a potential ‘no deal, hard Brexit.’ The pair has started to crack down through multi-month range support near 0.8865, which has proved itself numerous times since May 2020. EUR/GBP rates remain below their daily EMA envelope, which is in bearish sequential order. Daily Slow Stochastics are nestled in oversold territory, while daily MACD is trending lower in bearish territory. The path of least resistance appears to be to the downside. 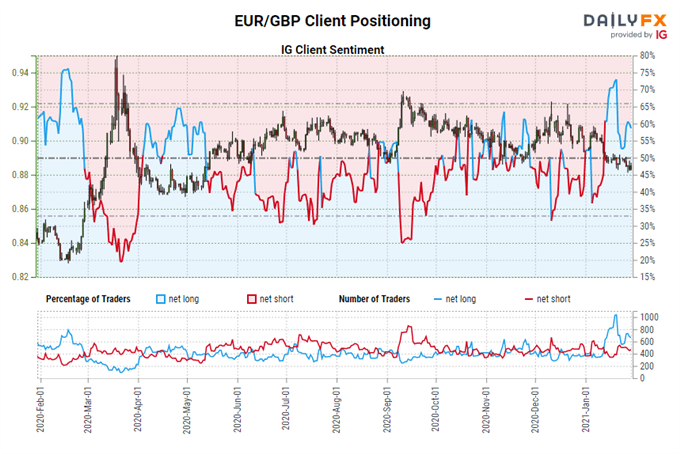 Positioning is less net-long than yesterday but more net-long from last week. The combination of current sentiment and recent changes gives us a further mixed EUR/GBP trading bias.