The S&P 500 continues its move higher on Wednesday with investor hopes for fiscal stimulus rise as the stalemate in congress endures. Now within 2% of its prior all-time high, the popular stock market benchmark shows potential to hit a new record, which appears increasingly likely assuming the current risk-on trend and seeming disconnect between equities and the broader economy persists. While the fundamental backdrop remains precarious; a recent string of high-impact earnings, primarily across the FAANG group, has helped bolster appetite for risk and boost US equities. The S&P 500 Index is now on pace to book its fourth consecutive daily gain even as the VIX drifts sideways. 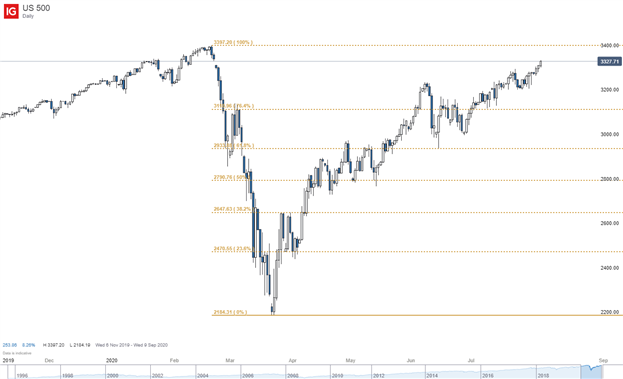 Despite efforts in Congress for another round of stimulus, divide between Democrats and Republicans lingers. Still, President Trump has recently floated the idea that he would act through executive action on certain relief efforts, like payroll tax exemptions or preventing evictions, should lawmakers fail to reach a consensus. While this may or may not materialize, the scope of fiscal action possible through executive action remains unclear. Looking at S&P 500 price action, however, traders appear to be drooling over the thought of additional fiscal stimulus likely coming down the pipeline. 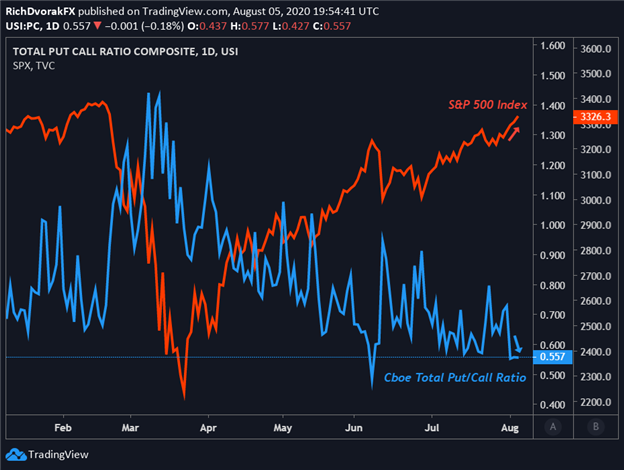 Looking to trader positioning given recent developments like last week’s FOMC decision and high-profile equity earnings, plus the latest fiscal stimulus talks happening this week, options traders have turned increasingly bullish on the S&P 500 Index. This is judging by a drop in the Cboe total put-call ratio, which reflects the number of outstanding put options over the number of outstanding call options. A rising ratio and a reading above 1.0 indicates bearish market positioning on balance, while on the other hand, a declining ratio and a reading below 1.0 indicates bullish market positioning.

The current reading of 0.557 reveals that the market is positioned with roughly twice as many call buyers versus those holding puts. Furthermore, the trend of the Cboe total put-call ratio is now turning even lower over the last couple of trading sessions as demand for downside protection, or demand for put options, decreases, while the S&P 500 advances near record territory. 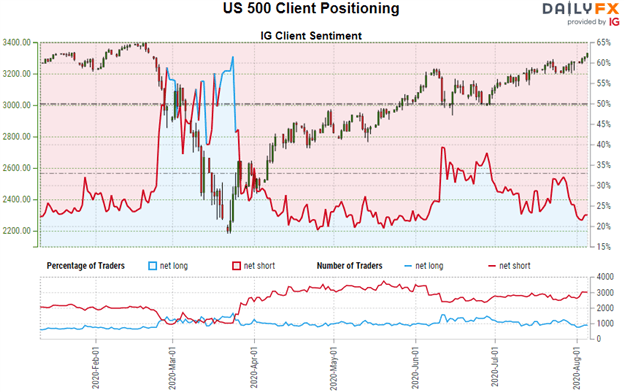 Shifting focus to retail CFD trader positioning, which typically sends a contrarian signal, IG Client Sentiment data indicates potential for the S&P 500 Index to pivot higher. According to the latest IGCS report, 76% of retail CFD traders are net-short the S&P 500. That said, this percentage has climbed 11% on a weekly basis, indicating increasingly bearish expectations among the retail trading group.

Moreover, the number of traders net-long dropped 17% compared to last week’s position. These recent changes in S&P 500 sentiment, viewed through a contrarian lens, suggests that the current upward price trend will continue despite the fact that retail CFD traders remain net-short on balance. Consequently, while being aware of these indicators can give traders meaningful insight, the driving theme of progress in fiscal stimulus efforts will likely drive market direction in the coming weeks.