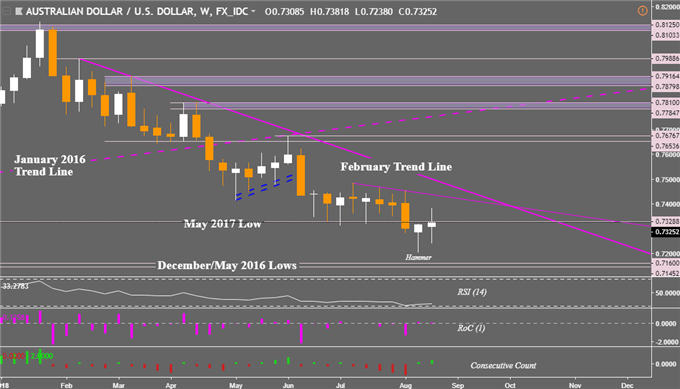 Last time we looked at the AUD/USD weekly technical forecast, we expected the pair to make some progress to the upside. Looking at the weekly chart below, this was somewhat the case after the emergence of a bullish reversal pattern. The pair was on pace for solid gains but upside momentum was lost and its ascent only turned out to be marginal.

Looking at the daily chart, AUD/USD was at one point climbing back into its familiar consolidation range from June. By the close of last Friday, it remains right on the May 2017 low at 0.73288. That was also its largest daily gain since June 4th. From a bigger picture, its dominant downtrend since February still remains in play. But for now, the pair may consolidate between near-term resistance and support.

The former is around 0.73818 or the August 21st high. A push above that exposes a descending resistance line composed of the July and August highs. This line also intersects the February trend, making for a potentially stubborn area of resistance. In the event Aussie Dollar pushes above that and potentially reverses its significant progress to the downside, we may eventually get to the June 6th high at 0.76767.

On the other hand, immediate support is at 0.7238 which is the low set on Friday. A descent under that then exposes the current 2018 low at 0.72026. Continuation of AUD/USD’s dominant downtrend would then involve getting beyond the December/May 2016 lows between 0.7160 and 0.7145. With that in mind, the technical outlook for AUD/USD will turn to neutral for the week ahead. 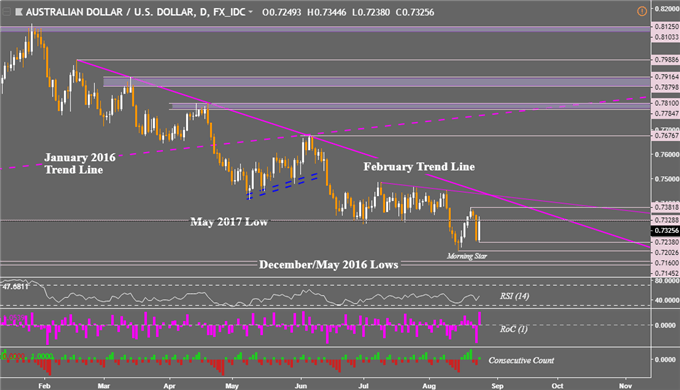