Puzzled by a currency move? Join a DailyFX Webinar and ask one of our friendly analysts

The Japanese Yen’s technical charts offer many possibilities but sadly few certainties at present, which means choices will have to be made on the balance of probabilities.

The near-term USD/JPY candlestick version makes it look as though a head and shoulder pattern may be in the offing. After all the current climb seems to be losing momentum already, before it gets anywhere near the previous peak of 114.72. And it’s losing momentum just about exactly where the putative first shoulder was made. Should the second be confirmed by a marked move lower from current levels then the entire climb up from September’s lows in the 107 region could be in some jeopardy. 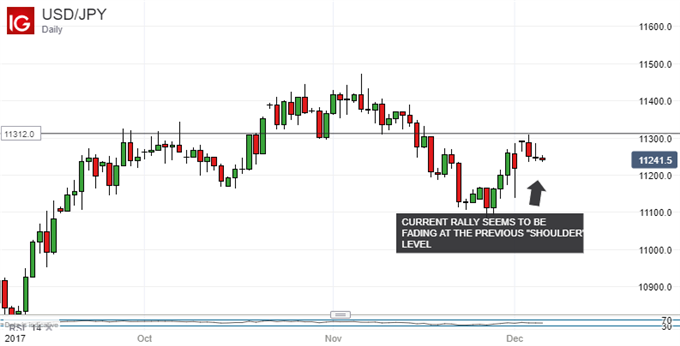 That said, the fundamental backdrop could change markedly in the days ahead. Some key US labour-market data looms on Friday and then, next week, will come the US Federal Reserve’s last monetary policy conclave of the year. That it expected to produce a rate increase, albeit one so well flagged that it can hardly be expected to move the greenback. What might, however, is the extent to which the US central bank sticks with its current prognosis that three more rises are likely in 2018. That could lend the Dollar considerable support.

Under such circumstances it must surely make some sense to wait until we’ve heard from the Fed before assuming that USD/JPY is indeed headed sustainably lower.

It’s also worth looking at the range which has essentially contained USD/JPY all year. To be sure it is broad, taking the pair from the 107-region up to the 114s. But it has endured through all of 2017’s fundamental twists and turns and it is probably safest to assume that it still does, in the absence of clear evidence to the contrary. 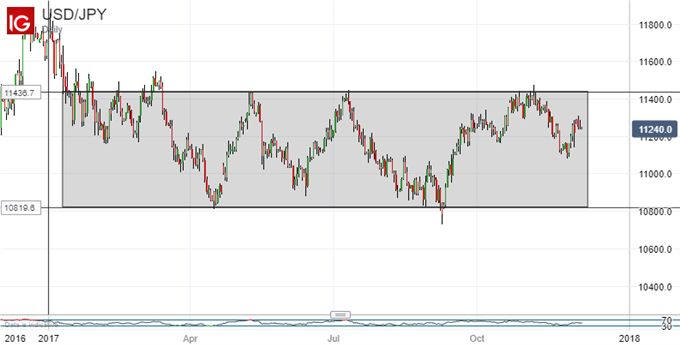 The British Pound meanwhile continues to be buffeted by the vicissitudes of increasingly torturous Brexit negotiations. It got a boost against most of its major rivals, including the Japanese Yen last week when it seemed likely that a deal might be done which could trigger the start of all-important trade talks.

However, now that that hope has been dashed, GBP/JPY seems not to have retraced very far, certainly not when compared with the rise of EUR/GBP since. However, it looks as though the pair has at least topped out once again, and support in the 146.90 area could soon be back in focus. 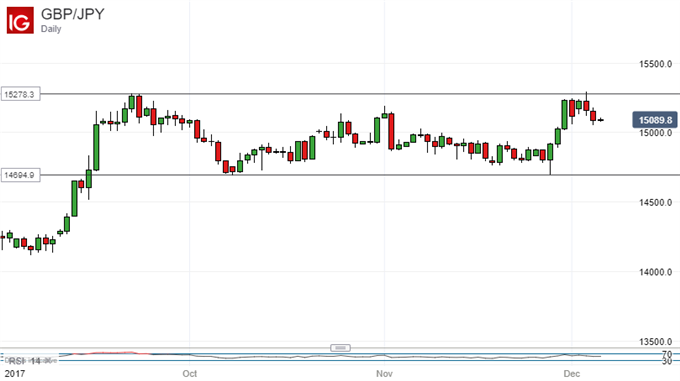