The GBP/USD is trading in the confines of a well-defined technical range (see chart below) after the pound recovered some losses following the October 6 “flash crash”, which sent the British Pound to fresh three-decade lows.

Looking ahead, UK third-quarter GDP numbers headline the economic docket and upbeat figures could help facilitate a larger corrective move by the Sterling.

UK Advance 3Q GDP figures are set to hit the wires 08:30 GMT. Expectations are for 2.1% growth in 3Q year-on-year, as the prior figure.

The numbers will represent the first full growth indication of the UK following the Brexit referendum, which could prove significant to understand the state of the economy under the future exit uncertainty.

Upbeat prints may encourage the view that activity in the UK remained better than initially feared, potentially offering a short term boost for the British Pound, especially as the Bank of England might have to endorse a “wait-and-see” approach following the British Pound sharp depreciation, possibly pushing inflation to far from the Bank’s 2% target.

Follow through could prove limited however, as fears from a “hard-Brexit” could still cap British Pound gains.

US September Durable Goods Orders are on the docket as well, and may see a short burst of volatility, but appear unlikely to have significant follow-through as participant might hold back before committing to directional US outlook before the more significant US 3Q GDP data tomorrow.

We use volatility measures as a way to better fit our strategy to market conditions. The British Pound is still expected to be the most volatile major currency versus the US Dollar based on 1-week and 1-month implied volatility measures after the flash crash, even though the numbers declined significantly.

With that said, 14-Day ATR readings have sunk following the spike higher on the sharp decline, implying that the pair could be capped in a range under current conditions; “wait-and-see” BOE as opposed to “hard Brexit” fears. 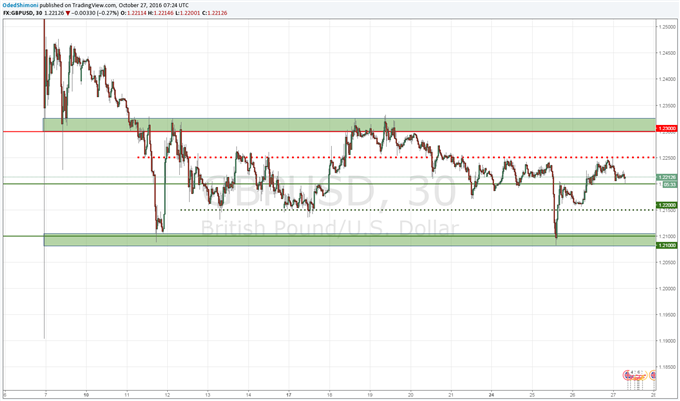 The GBP/USD is trading in a well-defined range between the 1.23 resistance area and the 1.21 handle support, pivoting around the 1.22 handle.

Other support levels to watch might be 1.2150 ahead of the range low.

The major level of resistance in the short term appears to be 1.2250 ahead of the range high. 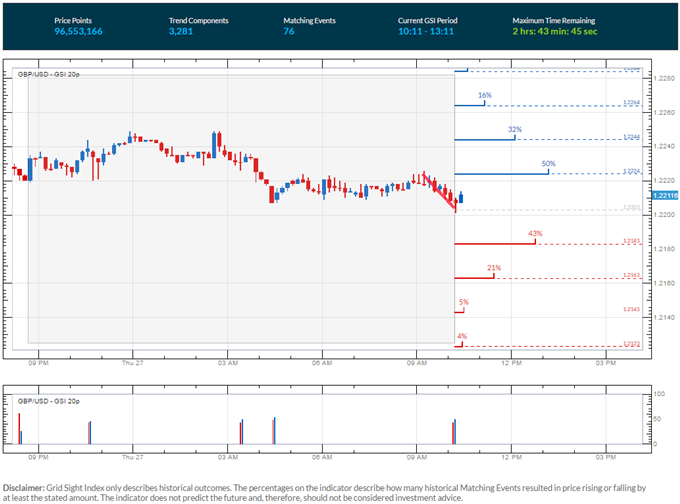 In the short term, GSI is showing similar momentum patterns moved about an even percentage of past events to either side.