EUR/USD in Focus Ahead of Draghi and US Consumer Confidence

- EUR/USD trading above potential support around the 1.0800 area

- Draghi could drill down message that taper is not coming soon, Fed hike speculation in focus as well

The EUR/USD is edging slightly higher today after the pair took another leg lower following last week’s ECB rate decision, in which Draghi signaled the central bank isn’t looking to taper its QE program in the near term.

This puts the focus on the Draghi comments later today, but US Consumer Confidence and Fed’s Lockhart are also on tap.

US Consumer Confidence is set to hit the wires 14:00 GMT. The assessment of consumer sentiment is expected to show a decline in confidence for a 101.0 print from the prior 104.1 figure. Together with comments from Fed’s Lockhart later today, the numbers may put Fed rate speculation is focus, but with the more significant GDP release this coming Friday, influence may be muted.

This seems likely to put the spotlight on the Draghi speech in Berlin for potential market moving influence on the pair.

The Euro moved lower following last week’s ECB rate decision, in which Draghi emphasized that the bank isn’t looking to taper its QE program in the near term, but rather work on ensuring the smooth implementation of the program.

Another lean to a more dovish tone by the European Central Bank president might see the pair edge lower again.

We use volatility measures as a way to better fit our strategy to market conditions. Despite seeing implied and historical volatility pick up recently, the pair is still expected to be less volatile than other major crosses. 20-Day ATR readings as well are still sitting at subdued levels.

In turn, this may imply that longer term tech levels may still hold. 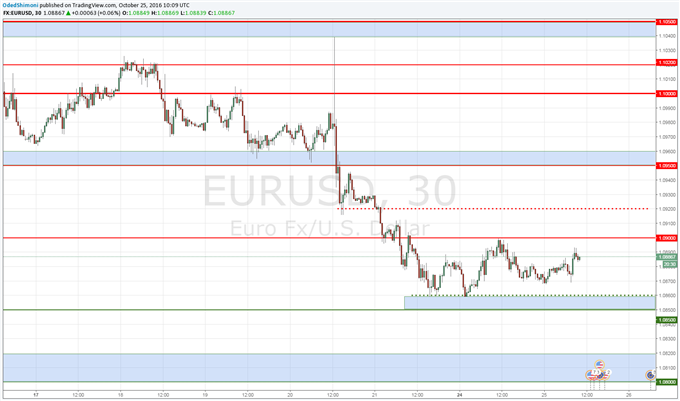 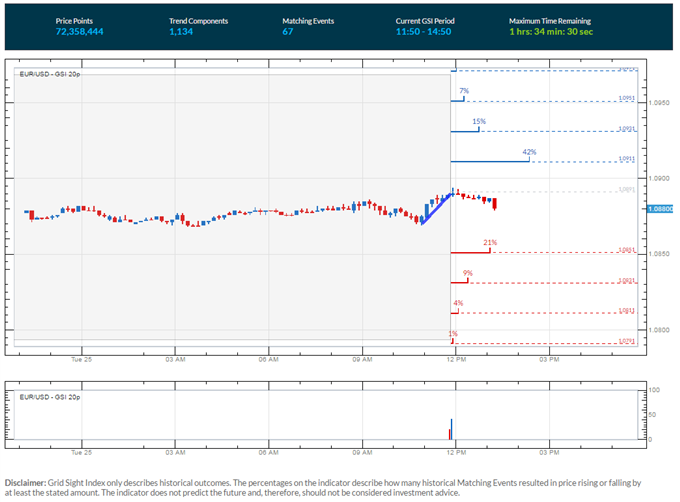 In the short term, GSI is showing similar momentum patterns moved to the upside significantly more often than not.

The GSI indicator above calculates the distribution of past events outcomes given certain momentum patterns. By matching events in the past, GSI describes how often the price moved in a certain direction.