The CoT report is an intermediate to long-term indicator; for short-term sentimentindications see the IG Client Sentiment page.

The most recent CoT report showed a big uptick in the net-long position among speculators in the euro, taking it above the prior record set in 2007. Large trend-followers go against their normal behavior and flip net-short the Australian dollar despite it rallying.

Every Friday the CFTC releases the Commitment of Traders (COT) report, showing traders’ positioning in the futures market as reported for the week ending on Tuesday. In the table below, we’ve outlined key statistics regarding net positioning of large speculators (i.e. hedge funds, CTAs, etc.). This group of traders are largely known to be trend-followers due to the strategies they typically employ, collectively. The direction of their position, magnitude of changes, as well as extremes are taken into consideration when analyzing how their activity could impact future price fluctuations. Large speculators build largest net-long on record in the euro, topping the 2007 level

Euro large speculators have built up a record net-long position, now standing at 127,868 contracts. This tops the prior record set in May 2007, where this group of traders held 119,538 contracts long. The fact their positioning has become this large presents a slightly cautionary signal as it indicates perhaps we are seeing overly bullish sentiment, but doesn’t signal an imminent reversal. In 2007, large specs held a sizable long position for an extended period of time while EUR/USD continued to rally from the 13000s to a peak of over 16000. The recent surge in buying, however, was one of the biggest one-week jumps ever seen at +35.7k contracts. This could signal at least a pause in the trend in the near-term. Looking out longer-term, though, until price action begins to turn bearish large trend-followers could continue to maintain their position before it becomes a relevant factor in a broader trend reversal. For now, EUR/USD holds a bullish technical outlook. 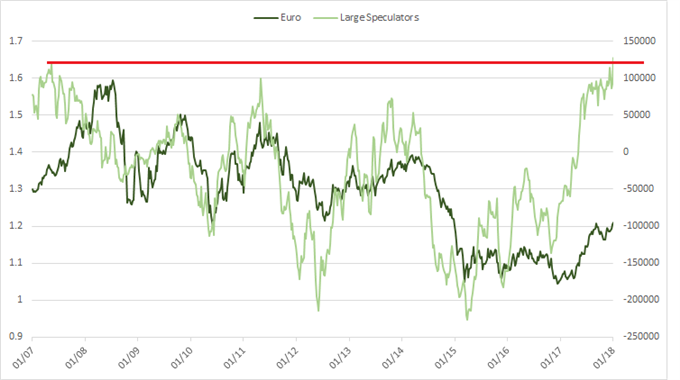 Large speculators are demonstrating curious behavior in the Australian dollar. A dramatic shift in recent weeks has taken shape, where large spec net-positioning went from long over 40k contracts to net-short just over 20k contracts, a -60k change in a very short period of time. This took place all the while AUD/USD has undergone a sharp rally from just under 7500 to over 7800. Typically, this kind of rise would have garnered buying interest by large specs who, collectively, employ trend-following strategies. It is unclear what this may mean at the moment, but if the Australian dollar continues to rise we may see a sudden reversal in recent selling, possibly accelerating the rally. 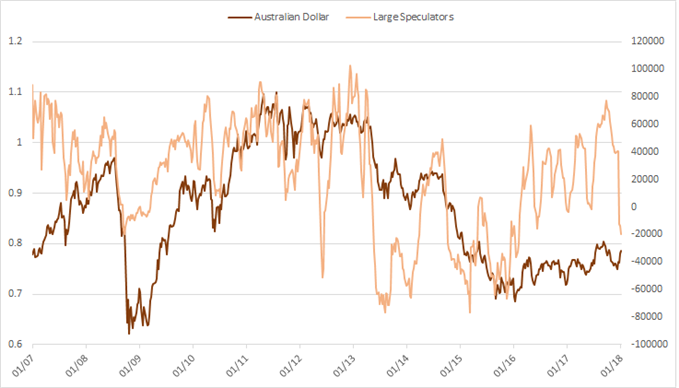 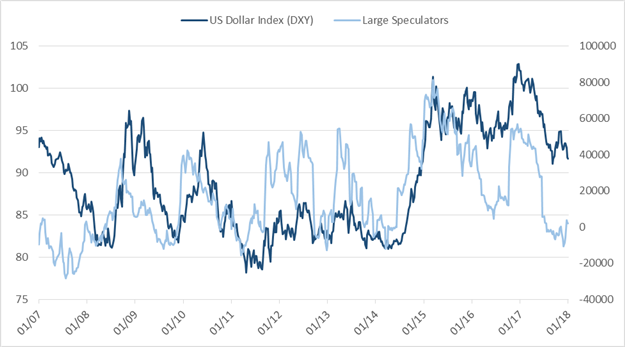 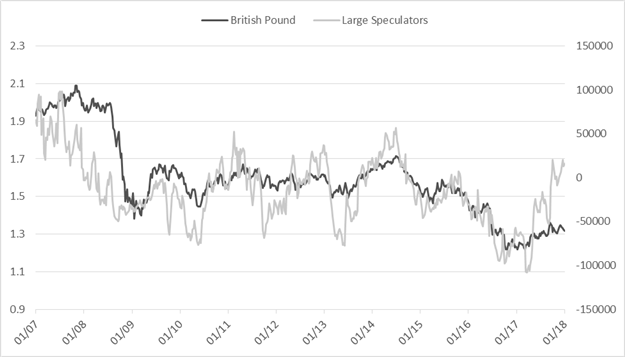 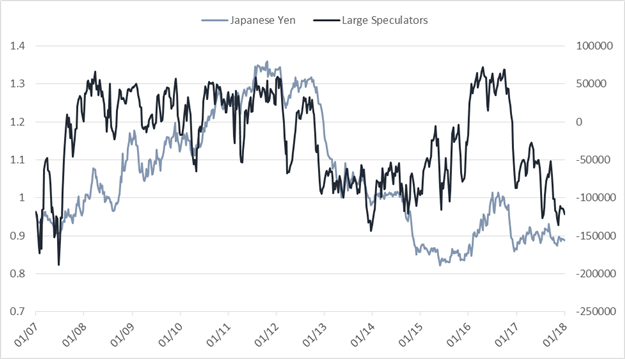 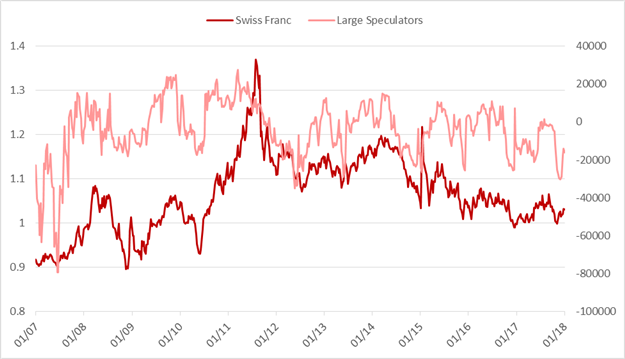 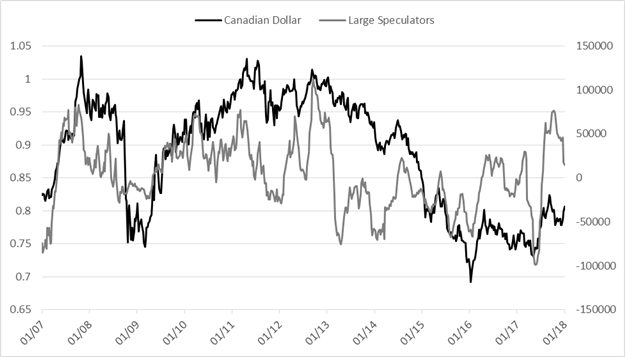 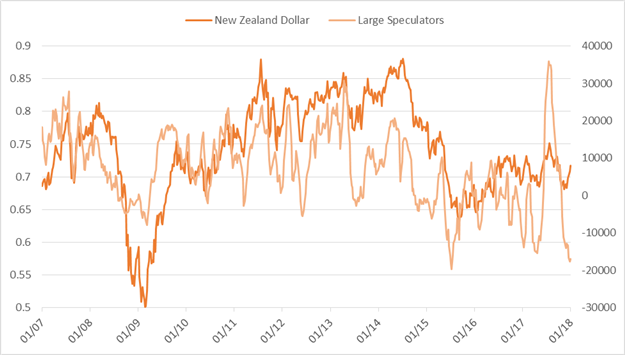 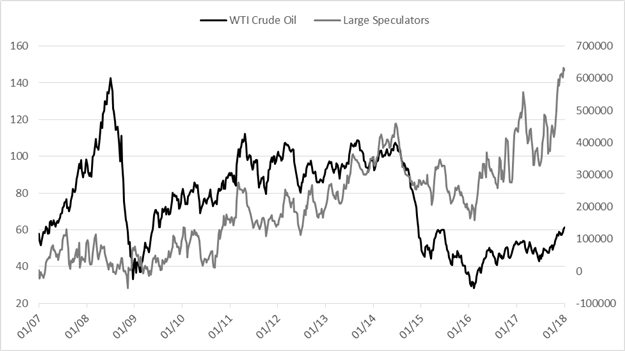 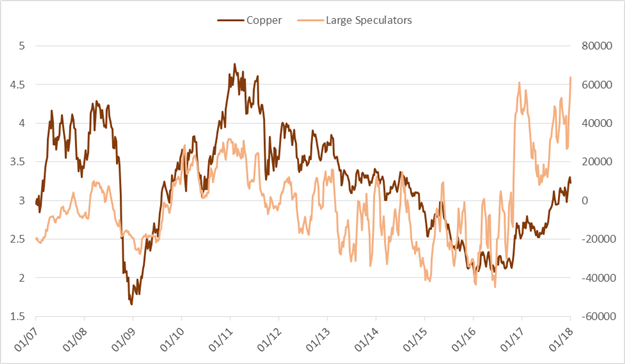 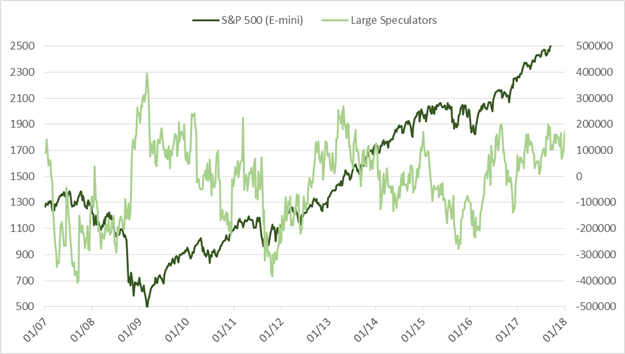