Stocks gained as a quiet economic calendar stateside fueled a rally in risk assets. European sentiment was upbeat as rumors circulated about a potential 50 basis point rate hike from the European Central Bank on Thursday, while Nord Stream 1 also came back online. This mix of news gave a much needed bid to EURUSD, which broke through 1.02 and pushed further away from parity. Whether this is a “front-running” of the ECB meeting remains to be seen, as a larger than expected rate hike may bolster recent Euro strength even more.

Back stateside, equities pushed higher as tech shares outperformed. All eyes will be shifting to corporate earnings prior to the Fed meeting at the end of the month, with Netflix set to kick off the proceedings for tech on Tuesday. Equities bounced back from a significant late session decline on Monday, after reports surfaced that Apple may look to slow hiring in some key business areas. A softening Greenback has eased sentiment surrounding risk, with expectations of a 100 bps rate hike from the Fed shrinking each day.

S&P 500 futures have fully retraced Monday’s pullback, where bullish momentum had stalled around 3900. The break of 3900 ushered in a test of the 3920 zone, which has stalled the advance for now. If ES can take out the monthly high, bulls may look to test the late June swing high around 3950. Earnings will have a massive part to play in whether ES can explore higher prices, with somewhat lackluster bank earnings failing to sink the index. If tech continues to outperform, a retest of 4000 may be right around the corner. 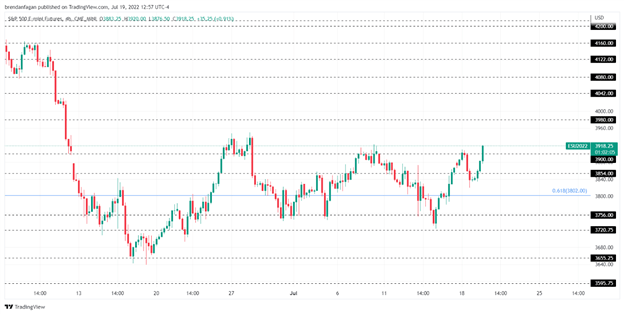 Despite the relief rally seen in the DAX 40 of late, shares remain considerably underwater for the year. Shares on the Frankfurt-based index rallied on Tuesday as Gazprom looks set to resume flows through the Nord Stream 1 pipeline following the completion of annual maintenance. While it remains to be seen if those flows are at pre-maintenance levels, market participants can breathe a sigh of relief that flows were not shut off entirely. Prior to the work, flows from Russia to Europe were being capped at 40% of capacity. Traders should remain wary, as the Kremlin has offered no stance on whether flows will shut off later this week.

Should flows resume and the European Central Bank regain some credibility in the fight against inflation, European shares may continue to trade higher. Relief from soaring energy and food prices will offer hope that any pending recession may not be as bad as once feared. Just this morning, it was revealed that Russia and Ukraine may be nearing a deal to allow for safe passage of grains out of the war torn country. If bulls can sustain recent optimism and break through overhead resistance around 13400, traders may look to fill one of two gaps remaining from June’s price action. 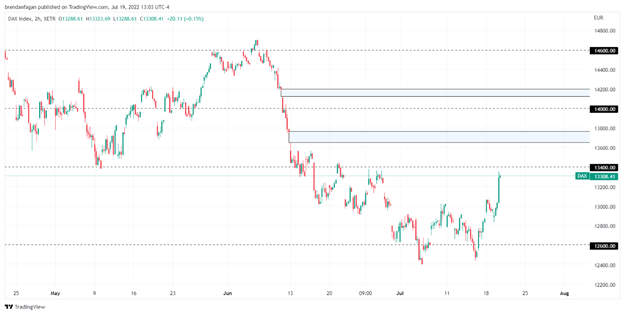