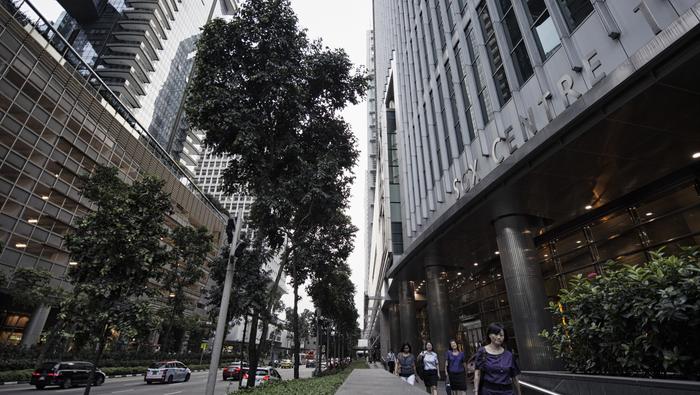 The Singapore Dollar received a surprise boost from the Monetary Authority of Singapore (MAS) after an off-scheduled policy announcement. The central bank recentered the mid-point of its policy band to prevailing levels. This would allow the SGD to find some momentum against its peers. Due to Singapore’s heavy reliance on trade, the MAS conducts monetary policy using exchange rates.

A stronger Singapore Dollar would thus work to make imports potentially cheaper, helping to alleviate inflationary pressures. Last month, local headline inflation sharpened more quickly than anticipated, touching 5.6% y/y for May. That was the highest since November 2011. Meanwhile, the core reading touched its highest since the end of 2008, approaching a 14-year high.

The MAS typically meets twice a year to conduct monetary policy. This off-meeting announcement is also not the first of its kind this year, likely speaking to the urgency of the situation. The city-state’s economy expanded just 4.8% y/y in the second quarter, missing the 5.4% estimate. GDP was null quarter-over-quarter, failing to meet the 1% forecast.

Unsurprisingly, the MAS raised inflation projections for this year. Core CPI is now seen at 3 – 4%, with the headline rate somewhere between 5% and 6%. The next scheduled meeting is set for October and comes as a welcome surprise. Overnight, US inflation unexpectedly surprised higher at 9.1%. This virtually solidifies the odds of a 75-basis point rate hike, with some now calling for a full 100bps boost this month.

As such, the surprise hawkishness from the MAS could help alleviate pressure from a stronger US Dollar. Still, it may not quite be all clear yet for SGD and Asia-Pacific Emerging Market currencies. A more hawkish Fed risks further amplifying developing market capital outflows as well as inducing risk aversion. This may leave the US Dollar in a spot to continue its relentless ascent ahead. 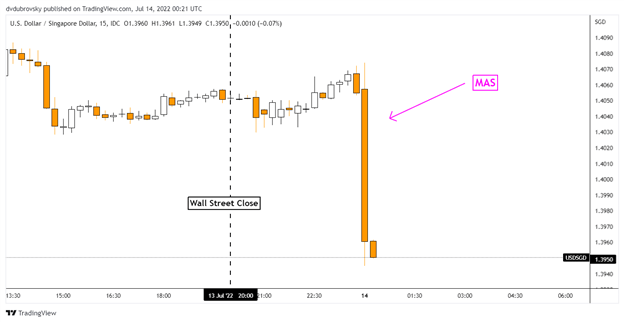 After the turn lower, USD/SGD is testing an emerging rising trendline from late May – red line in the chart below. A confirmatory breakout under could open the door to further losses. In such an outcome, the 50- and 100-day Simple Moving Averages may play out as key support levels, perhaps maintaining the dominant uptrend. Key resistance seems to be the 78.6% Fibonacci extension at 1.4115. 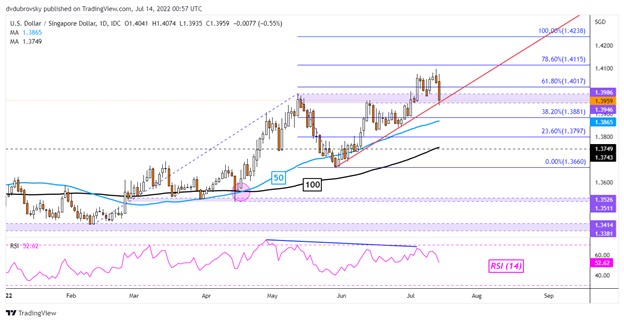