Boris Johnson to Resign after Slew of Resignations

News broke earlier today that the UK Prime Minister is Set to Resign after it was announced that he would address the media later today. This comes after a number of high-profile ministers resigned over the last few days in protest of Johnson’s continued leadership within the governing Tory party. Johnson has come under immense pressure after being sanctioned for breaking lockdown rules.

The news of the probable resignation has helped EUR/GBP continue its downward movement after breaking below the ascending channel, which contained price action for two months. In addition, the euro itself isn’t faring very well amid economic concerns, the potential for widening periphery bond spreads as the ECB raises rates; and the possibility of complications in restoring Russian gas inflows to Germany via Nord Stream 1 which is due to undergo routine maintenance from next Monday until the 21st.

The breakdown of the ascending channel raises questions as to whether prices will continue to fall, resulting in a trend reversal. What complicates the issue, is the fact that the euro and the pound have both performed dismally over recent months as fundamentals deteriorate (surging energy bills, higher general prices and lower forecasted growth).

On the daily chart the 0.8500 level may act as support, halting the recent decline over the short-term. The next level of support appears at 0.8450 followed by 0.8410. A bounce off 0.8500 may see a pullback towards the lower bound of the channel (blue line) or 0.8595, which appears an awful long distance away. 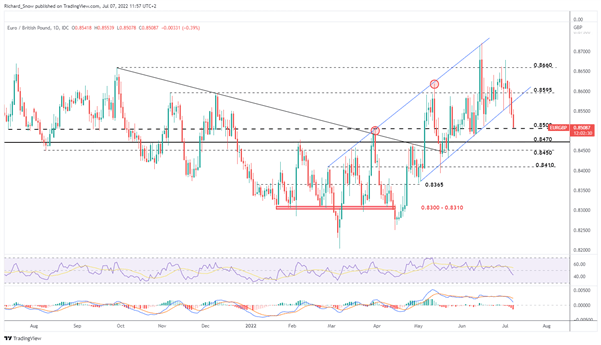 The 4-hour chart zooms in on more recent price action within a pitchfork, as prices breached the midline, trending lower. We may see some consolidation after the strong move around 0.8500 and the midline before the next directional move.

Trading with Pitchfork and Slopes

Learn How to Use Pitchforks 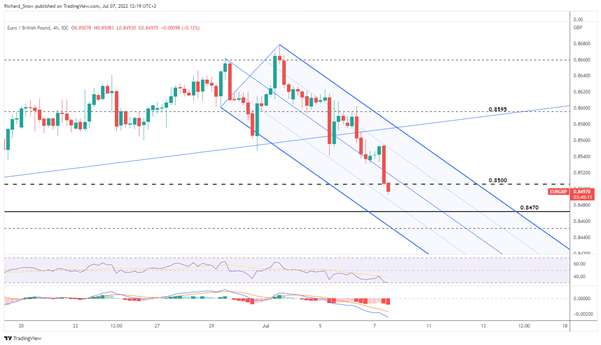 Main Risk Events for the Next 7 Days

Major risk events include the ECB meeting minutes from the June meeting, the first time the little-known anti-fragmentation tool was mentioned by Christine Lagarde. The ECB president is then due to speak tomorrow with ZEW economic sentiment data due Tuesday, followed by UK GDP for May on Wednesday. The US non-farm payroll data deserves an honourable mention for tomorrow as it tends to elevate volatility across major pairs. 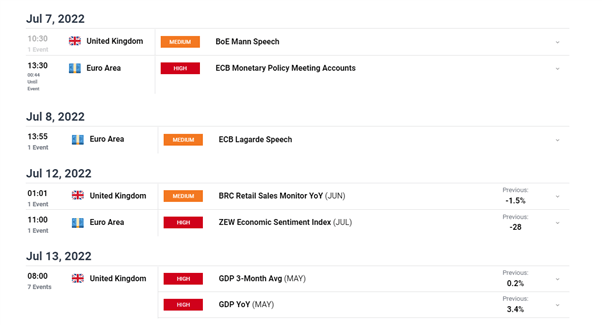