Despite last week’s dovish BoE rate hike, in which the Bank voted in an 8-1 split to hike 25bps. The Pound alongside rate expectations remain supported. However, while the lone dissenter who voted for the Bank Rate to be left unchanged grabbed market participants’ attention, there was also a notable change in the forward guidance.

This in turn suggests that the BoE could be soon approaching a pause in the hiking cycle and adopt a wait and see approach. This takes into account the more cautious view on the UK’s growth outlook in light of the escalation of geopolitical tensions. As such, while money markets price in over 75bps worth of hikes in the next three policy meetings there is a risk the Bank pauses at 1%. Keep in mind that with a bank rate at 1%, the BoE will have an additional option to tighten monetary policy through active selling of gilts.

What does this mean for GBP?

Now while a re-pricing lower would weigh on the Pound. It is worth highlighting that market participants have been reducing their exposure in GBP even in the lead up to last week’s BoE meeting. Meanwhile, asset managers (real money funds) are holding a sizeable short position in the Pound, which may in fact provide a tailwind for the currency should geopolitical tensions ease. That said, aside from short term volatility from a re-pricing lower in rate expectations, the bigger driver for the Pound will be the Russian-Ukraine conflict. Although, the Pound may well struggle on the crosses vs currencies backed by hawkish central banks (CAD, NZD). 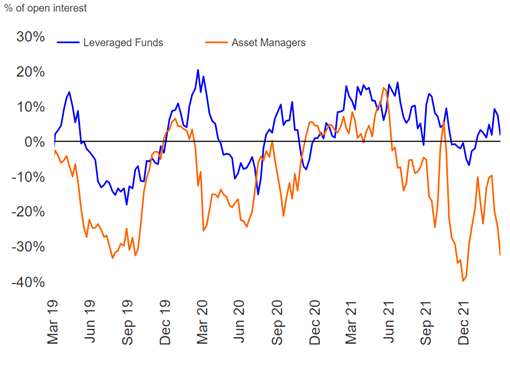 Only Way is Up for UK CPI

Tomorrow will see the release of the UK CPI report, which is projected to hit 6% for the headline and 5% for the core figure. From a trading standpoint, the release has failed to prompt a sharp reaction in the Pound. However, while a reasonable upward surprise (0.1-0.2ppts above exp.) is unlikely to invoke a sizeable market reaction, I suspect the bigger move would be seen should we see a print in-line with expectations. A reading that matches estimates would be viewed a disappointment for GBP bulls resulting in a slight pullback. Although, with Chancellor Sunak expected to announce fiscal support, the reaction to the CPI figure is likely to be short-lived.

How Has the Pound Reacted to UK CPI?