Bank of England Preview: How Will The Pound (GBP) React

SUMMARY: In arguably the most important Bank of England policy meeting this year, markets are gearing up for a possible rate rise, which until a few weeks ago appeared very unlikely to take place this year. But after Bailey and Co. made their intentions clear that action will be required to curb rising inflationary risks, markets are now pricing in the most aggressive tightening cycle since pre-GFC, in which 100bps worth of tightening is priced in by Aug-22. In turn, this sets the bar high for the Bank of England to overdeliver on the hawkish side, heightening the risk of disappointment relative to expectations. 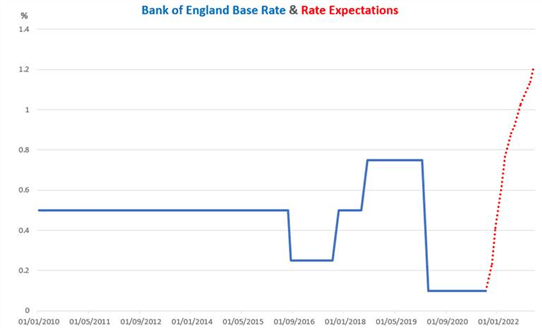 For this week’s meeting, money markets are fully priced in for a 15bps rate rise, while the survey of economists polled by Bloomberg shows a near 50/50 split with a slight edge for unchanged at 0.1%. Alongside this, eyes will be on the vote split, which is very unlikely to be unanimous and instead look more like a 6-3 or 5-4 split. In contrast to my view only a month ago, I believe the hawks have just enough votes to raise rates at the upcoming meeting. Refraining from doing so will be the worst-case scenario for GBP and likely see Bailey dubbed the “unreliable boyfriend 2.0”. To add to this, the focus will also be on whether the MPC pushes back on money market pricing or not, therefore, if there is no pushback on market pricing, this is likely to be the Pound’s only chance to rise post-BoE.

POSITIONING: Heading into the meeting, positioning data via CFTC shows that fast money (leveraged funds) are long GBP with real money accounts recently flipping net long. Now while this creates some asymmetry for GBP downside on the back of a hawkish disappointment, it is worthwhile noting that spot GBP is down near 1.5% since Friday’s peak above 1.3800 to current levels of 1.3600, which does reduce some of the attractiveness of adding fresh downside exposure from the low 1.3600s ahead of the meeting. 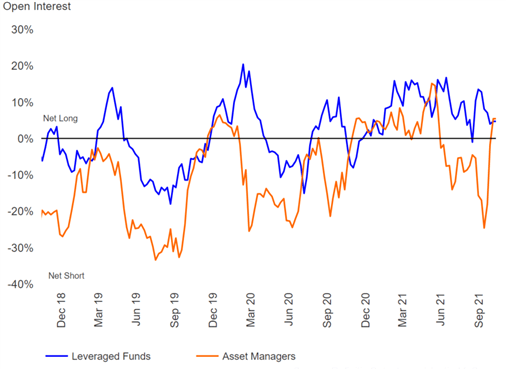 BOE COMMENTARY: Since the September meeting, the message from the Bank’s core members has been to act sooner rather than later in order to prevent inflationary pressures from spiralling, which in turn has fuelled expectations that the BoE will tighten monetary policy. BoE Governor Bailey has repeatedly stated that the Bank must prevent inflation expectations from becoming embedded, while the recently appointed, Chief Economist, Pill, has noted that the need for current supportive settings has diminished. On the flipside, both Mann and Tenreyro have signalled their willingness to wait, with the latter highlighting that raising rates in response to one-off factors would be self-defeating. What has left market participants with the will they, won’t they on pulling the trigger, is who Broadbent and Cunliffe will side with. Although, as it stands, I am slightly biased to see them side with the core members as opposed to the dovish external members (Tenreyro, Haskel and Mann). 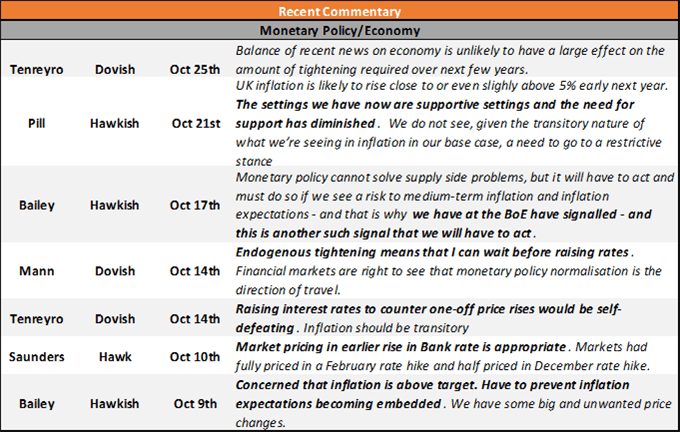 DATA: On the whole, economic data has remained robust, inflation is firmly above the central bank’s 2% target, with the latest figures showing the headline rate at 3.1% and core CPI at 2.9%, while upside risks could see inflation rising above 4%. Labour market data continued to show signs of strength, although, keep in mind that this still includes the support from the furlough scheme. The scheme has now expired, yet the BoE will not have access to hard data covering the initial impact of the furlough scheme expiration until the December meeting. A crucial data point that is perhaps a good reason to hold off on raising rates and has prompted the more dovish members to prefer to wait and assess the impact on the labour market before voting to hike rates.

The inflation forecast over the medium term (2-3yr) will be closely watched, given that if the BoE continues to see inflation returning to its 2%, then this would be implicit in suggesting that the BoE remains of the view that inflation will prove transitory and likely disappoint GBP bulls. We can expect short-term inflation forecasts to be revised higher as has been well documented by Chief Economist, Pill, who stated that he wouldn’t be surprised in seeing inflation at 5%.

MARKET REACTION: Heading into the meeting, I am leaning towards a hawkish disappointment with a very close vote split (6-3 or 5-4) in favour of a hike. QE to remain unchanged and continue until the end of the year, while the Bank downplays the aggressive tightening priced in by money markets, which leaves GBP exposed to an extended pullback. Whether the BoE pushes back on market pricing will be key, given ECB Lagarde’s failure to do so provided Euro an initial lift, while RBA Lowe push back against the market prompted the Aussie to underperform.

The shock scenario would be for the Bank of England to not raise rates on the basis that markets are fully priced in for a rate lift-off at this week’s meeting. Therefore, should this scenario be realised, this would leave GBP at risk of dropping to 1.3500 and prompt gilts to rally aggressively.