Altcoin SQUID sees Collapse after 310,000% Jump in Value. Here’s What We Learned 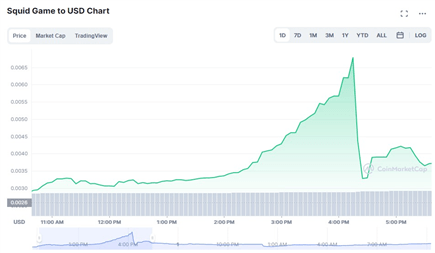 The alt-coin crypto currency, SQUID, has collapsed, leaving its investors with nothing, after a massive 310,000% spike in value. Investors lost their money, and the altcoin space saw another instance of abuse.

The crypto currency SQUID launched on Wednesday, October 20th, less than a month after the now culturally ubiquitous Netflix series Squid Game was released. On October 1st, the crypto currency reached a peak market cap of $16 million USD. Shortly thereafter, the developers of the coin announced they were shutting down the project, and its value imploded to $0. According to Gizmodo, the initial creators of the crypto currency could have made as much as $2.1 million.

There were some red flags prior to the cryptocurrency’s collapse. Investors in the coin had trouble liquidatiing their tokens. Even more important, the coin’s whitepaper, which is no longer available on the internet, was reportedly riddled with grammatical errors.

The whitepaper for $SQUID was a lofty idea. The creators of the coin aimed to use the $SQUID token to create a digital version of the elimination-based game featured in the Netflix series. The final player in the game stood to win $SQUID tokens as a prize. There is little information regarding the tech-stack the engineering team planned to use, or any clear information regarding the project’s management.

This Is Not a Game

The crypto market has been riddled with stories of scams, pump and dumps, and rug pulls long before the trouble with $SQUID. Perhaps one of the most costly scams in the emergent market was Bitconnect which made fantastic promises of return, but the ICO (Initial Coin Offering) proved a Ponzi skim that bilked investors out of an unprecedented $3.45 billion.

What is beginning to change, however, is public sentiment. Crypto currency exchange Coinbase marketed the Shiba Uni coin in their app description and titles. That is a stark about face from listed exchange, as Coinbase previously waffled for months about allowing the meme-coin Doge on their platform. Just last week, the altcoin $SHIB saw a meteoric rise to a $44 billion market cap within 48-hours.

The gamification of investment has made investing in altcoins an increasingly volatile experience.