This week cryptocurrencies were on the charge with Bitcoin leading the rally. Elon Musk was at the center of attention once more after “The B-Word” discussion revealed his support along with other prominent CEO’s regarding the future of BTC. The Tesla CEO has been causing stirs in the cryptocurrency market for a while now and while the potential adoption of BTC within his organization could support further upside, markets are still wary after his previous erratic statements. 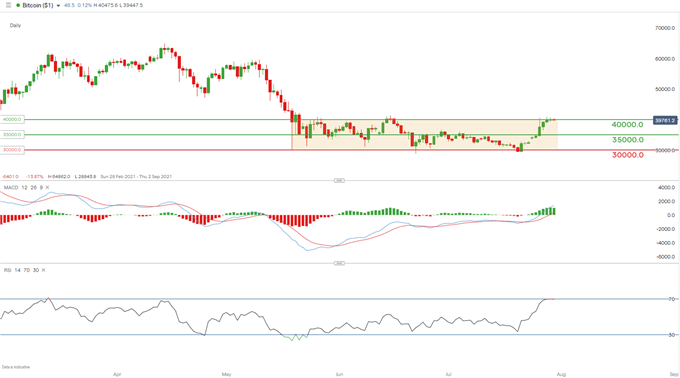 Technically, I have been referring to the rectangle pattern (yellow) for many weeks. Price action has respected the pattern at both upper and lower bounds. Breakout potential has yet to be confirmed as daily candles refuse to close above or below the respective bounds. This time around, the extended long upper wicks as well as overbought signals on the Relative Strength Index (RSI) may point to a rectangle continuation. This being said, cryptocurrency and BTC news from major market players and governments can always swing in favor of the digital coin.

On Wednesday, the Federal Reserve predictably announced no change to current interest rates. Markets however looked towards more clarity on taper talk and QE but were met with the same result as the previous June meeting – nothing! The result was met with persistent lower yields as seen on the U.S. 10-year government bond below. Many market participants are unsure as to the reasoning behind falling yields. Here are two factors currently sustaining lower yields:

Robinhood (HOOD) ended traded roughly 8% lower on its first day listed on the Nasdaq after an initial set price of $38. This price was already at the lower bound of the anticipated range which further exacerbated its disappointing trading day ending on $34.82.

A left field move from Robinhood saw a large portion of its shares being reserved for Robinhood customers (primarily small retail investors), contrasting with the usual bug firms and organizations. Once the stock tumbled at the open, these smaller retail traders likely fled causing sustained downward pressure. The chart below illustrates the relative net purchases of Robinhood shares against similar high profile IPO’s on the first day of listing. 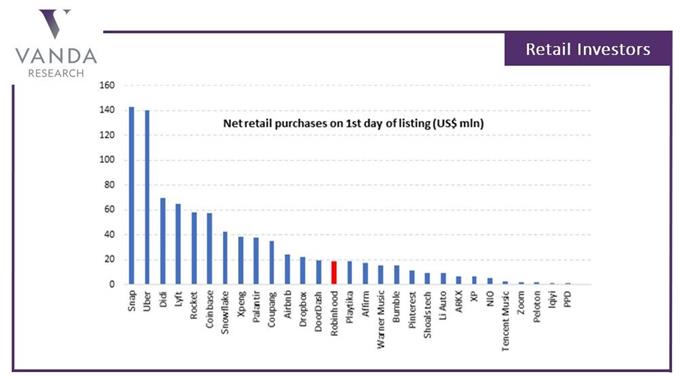 Going forward, markets will decide the fate of the controversial company reflected by its share price and whether or not investors and traders see growth potential. Regulatory pressure is a very real threat to the success of the business and could be a deterrent for risk averse investors at this time.