This week has been littered with key economic data and announcements which has had minimal impact on the USD/ZAR currency pair at this point. The majority of these announcements has been in favor of the U.S. dollar which adds to the resilience of the local currency.

Yesterday unveiled new highs for unemployment in South Africa (32.6%) – see calendar below. This reflects the poor economic conditions within the country which has been exacerbated by the COVID-19 pandemic. PMI data did come in favorably which may have taken a sliver off the negative unemployment figure.

U.S. PMI data supported USD strength which has continued today as better than expected figures were released by both ISM and IHS Markit. These positive manufacturing statistics created sustained price appreciation throughout many energy related commodities.

Friday will highlight the Non-Farm Payroll (NFP) announcement which could cause significant price fluctuation pre and post-announcement should actual data deviate from forecasts. This figure could also give markets some short-term guidance as to the economy in the U.S. which is likely to have a systemic effect across financial markets.

Eskom remains at the center of discussion in South Africa as continual Stage 2 blackouts plague the nation. This disruption in day-to-day activities puts a dampener on business which is detrimental to optimum operational efficiency and investor confidence.

The OECD released its latest economic outlook this week which did not bode well for South Africans. Worrying signs were apparent in several metrics but the two highlighted below show the severe impact COVID-19 has had on the developing nation as pre-pandemic levels of GDP per capita are forecasted by the end of 2024; which is notably worse than most of it’s Emerging Market (EM) peers.

Exports in services were the worst globally with a reduction by 59.8% relative to pre-pandemic levels. These numbers do not make for good reading which shows the daunting uphill task local government has in order to bring the country out of its current state.

As stated in previous analysis, once the global economy re-opens fully, these local woes will be exposed and magnified which could be extremely detrimental to local financial markets including the Rand. 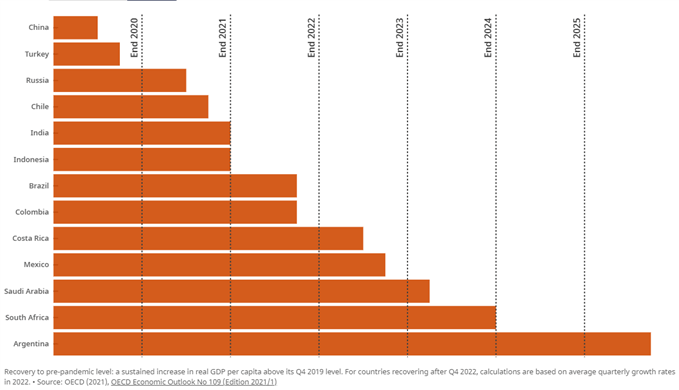 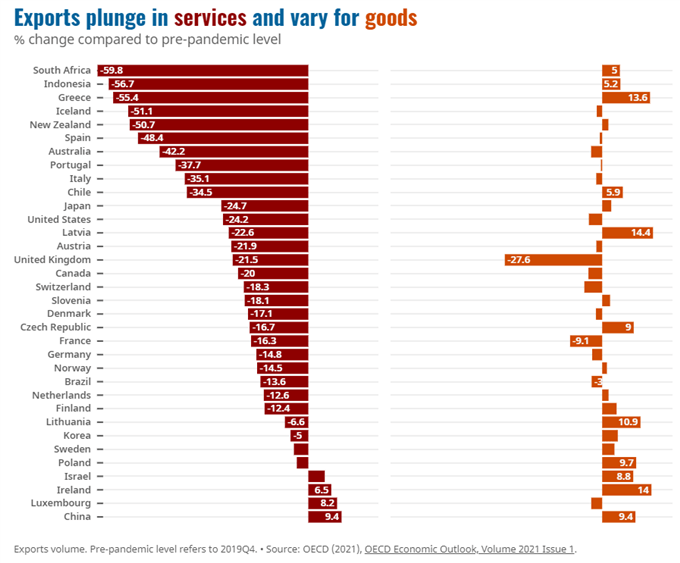 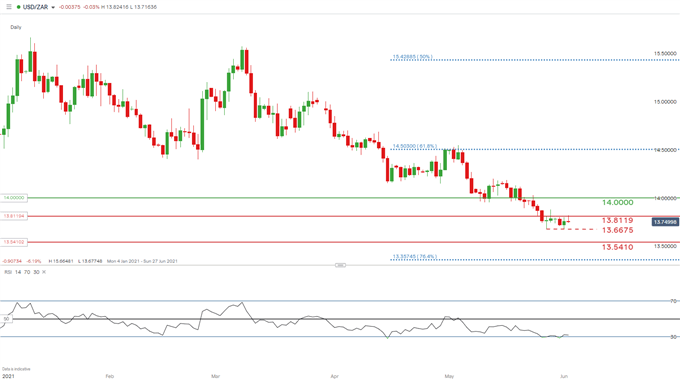 USD/ZAR is holding steady below the June 2019 swing low at 13.8119 this week with several Doji candlestick prints appearing. These Doji’s represent indecision which favors neither bears nor bulls. That being said, Friday’s NFP data could provide a catalyst spurring some directional bias going froward.

The Relative Strength Index (RSI) is currently in oversold territory which might spark a correction to the upside after a strong downward move however, trading against the trend without confirmation can be risky.

Bulls will be looking for 13.8119 as initial resistance with the 14.0000 psychological level as a subsequent target. Further downside will have bears utilizing last weeks swing low at 13.6675 which could open up the December 2018 low at 13.5410 if breached.