Disney reported mixed results for Q2, as earnings surpassed expectations, but revenues were lower than consensus estimates. Leading the disappointment was a miss on Disney+ subscribers, which came in at 103.6M vs. an estimate of 109M. CEO Bob Chapek painted a rosy picture for the future, highlighting the strength of the ESPN+ portfolio as well as the planned reopening of Disney parks nationwide. 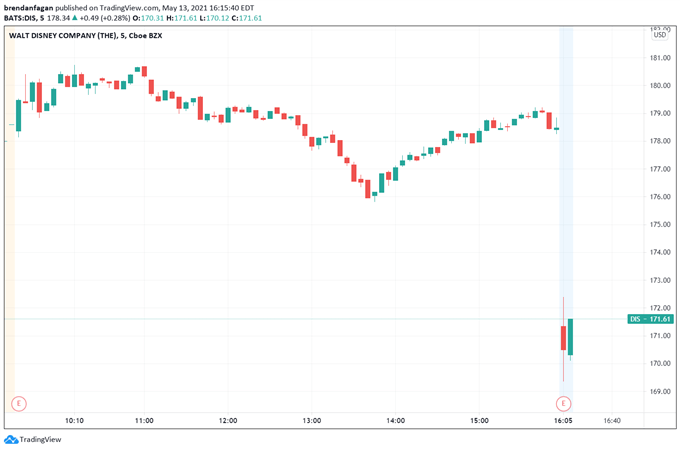 Airbnb shares also traded lower in the after-hours session, as the company missed consensus earnings estimates but beat quarterly revenue estimates. The company reported a quarterly loss of $(1.95) per share, as analysts were expecting a loss of $(1.17) for the quarter. Revenues, however, were strong, coming in at $887 million, against an expectation of $713.18 million. Airbnb stands to benefit from increased vaccination rates and fewer lockdown restrictions, as Americans look set to travel following the pandemic. Gross bookings came in at $10.3 billion vs. an expectation of $7.47 billion, highlighting the appetite Americans have to travel.

DoorDash shares were elevated following the closing bell despite the company reporting a wider-than-expected loss for the quarter. Revenues beat estimates, coming in at $1.08 billion against a consensus of $993.3 million. The adjusted loss per share totaled 34 cents, against an estimated loss of 26 cents. Despite the disappointing earnings miss, shares traded higher following improved guidance from management, which raised its 2021 forecast for gross order value to $28 billion from $35 billion. Management also commented on consumer demand, saying the demand for food delivery services remains stronger than expected despite the shortage of delivery drivers.

It certainly has been an unprecedented earnings season, with 86% of S&P 500 constituents reporting a positive earnings surprise as of May 10th. Should earnings continue to surpass expectations at this rate, it will mark the best quarter since FactSet began tracking the metric in 2008. Of note, earnings growth has tallied 49.4% for the quarter as corporate America benefits from the economic reopening. Investors will look to the recent strength in corporate earnings as a reason to remain bullish equities despite lingering fears of higher inflation in the months ahead. 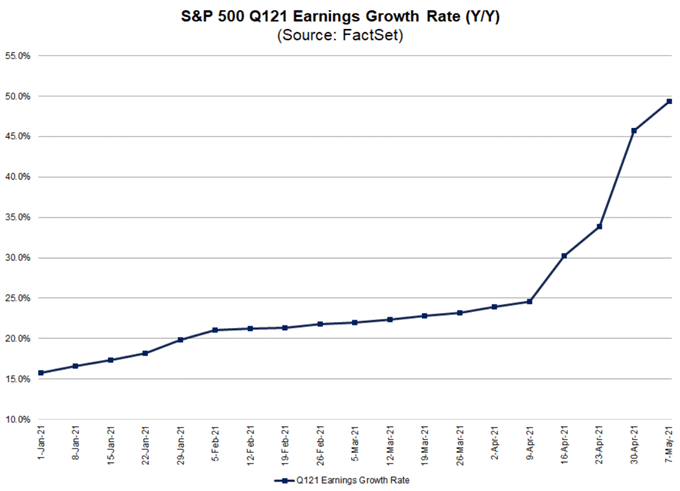