Brazil’s central bank (BCB) raised the target for Brazil’s federal funds rate by 75 basis points for the second consecutive policy meeting. This rate increase, which brings the target benchmark rate to 3.5%, puts Brazil at the forefront of tighter monetary policy. Policy makers announced following the rate hike that another increase of 75 basis points (bps) was likely to come at the bank’s next policy meeting in June.

With inflation printing hotter than expected, Brazil raised rates in March in an effort to stabilize domestic monetary conditions. As economists continue to forecast additional increases in inflation before the end of 2021, the rate increase from the BCB was not unexpected. In immediate trade, the U.S. Dollar edged lower against the Brazilian Real.

Brazil’s policy makers find themselves in a tough position, as vaccination rates remain lower than expected and inflation continues to print above target. Brazil is one of the world’s largest commodity exporters and would significantly benefit from friendlier export prices. While the Real has steadily declined over the last 3 years, a commodities “super-cycle” and improved vaccination efforts may be the catalysts that reverse this recent trend. 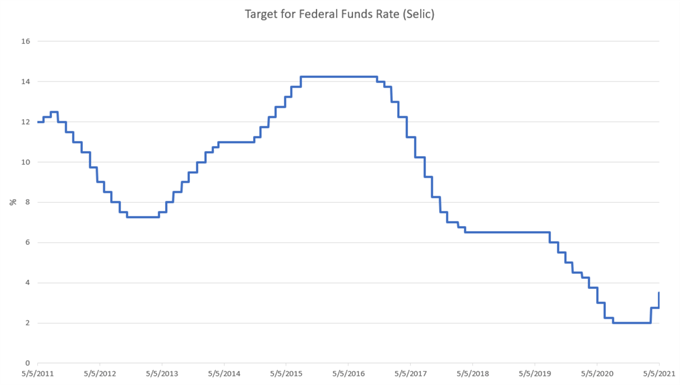 Brazil’s original decision in March to raise rates reflected the growing inflationary pressures the country is experiencing as commodity prices continue to surge. In a survey of market analysts, Brazil’s central bank revealed that inflation is expected to print 4.6% at the end of 2021 and fall to 3.5% by the end of 2022. Economists are forecasting an additional 75 basis point hike by the BCB before the end of 2021.

A stronger Real and continued demand for commodities may translate to strong gains for EWZ, an index that tracks a basket of Brazilian “blue-chip” companies. EWZ was a true laggard for much of 2020, but with the BCB leading the pack in terms of tightening, Brazil and its constituents may stand to benefit tremendously. When compared against geographic peers, such as VTI (US total stock market ETF) and IEUR (ETF providing exposure to developed European companies), EWZ has clearly underperformed. 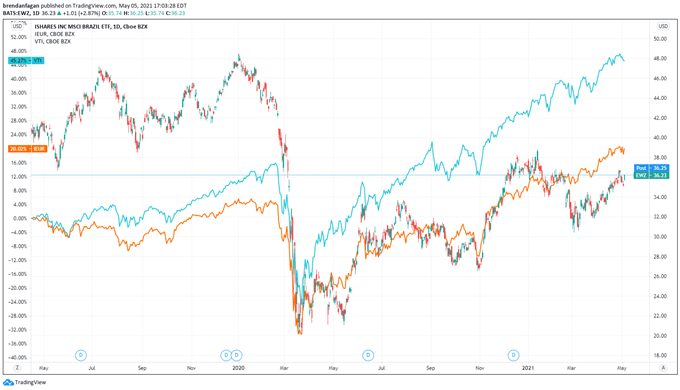