Bank of England Preview: Will the BoE Taper QE?

The Bank of England is expected to maintain policy settings with the bank rate left at 0.1% and APF at GBP 895bln. As such, given the significant improvement in the UK outlook amid a successful vaccination program and gradual easing of lockdown measures, the focus for this meeting will be on whether the central bank tapers the pace of weekly gilt purchases, which is currently at GBP 4.4bln.

Time to Act or Time to Signal Taper Intention

The BoE has already acknowledged that they will have to reduce the weekly pace of asset purchases at some point this year in order to hit the GBP 150bln APF target increase by the end of 2021. An argument for announcing a taper now is that at the current GBP 4.4bln pace, QE purchases would reach capacity by mid-late August, roughly the time at which the next MPR is scheduled and thus by tapering now, this would reduce the risk of a larger taper at a later point, which may have a bigger propensity to prompt unwarranted tightening. The alternative would be to signal an intention to taper and carry out the action at the June meeting, which is scheduled three days after the UK reaches the final steps of its roadmap out of lockdown. That said, with markets seemingly 50/50 as to whether the BoE tapers now or at a later date, the decision will matter for GBP in the short run. A decision to taper now is likely to see a knee-jerk higher in GBP. 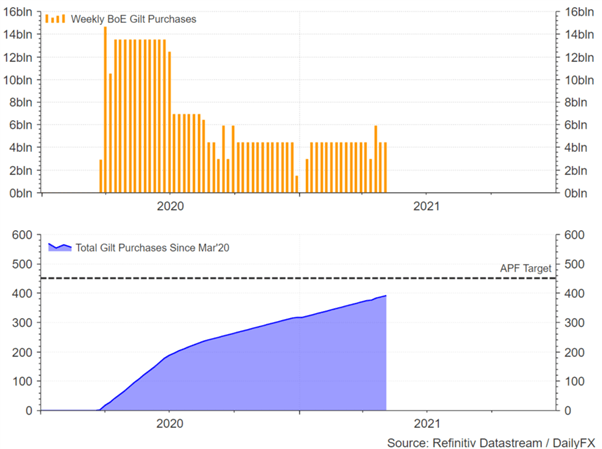 The case for the BoE to turn less dovish has strengthened in recent months, with a rapid pace of vaccinations and stronger economic data brightening the outlook for the UK. In turn, the MPR is expected to see an upgrade in GDP and the unemployment rate, given that the BoE highlighted at the prior meeting that growth is somewhat stronger than previously assumed, while an extension to the furlough scheme in the UK Budget will also be factored into the new MPC forecast

Judging by the limited BoE commentary, policymakers appear to be cautious in looking to reign in stimulus, despite the improvement on the UK backdrop and thus raises the risk that the BoE could wait until the June meeting to taper QE purchases.

Given that markets are seemingly 50/50 as to whether the BoE decides to taper QE purchases, there are good two-way risks for the Pound. That said, in terms of positioning, fast money accounts are long GBP/USD and so too are real money, which suggests that asymmetrically, a disappointment on the taper front has the propensity to result in a larger move on the downside. As it stands, GBP/USD ATM overnight implied volatility suggests an implied move of +/- 0.5% (or 70pips).My view is that the BoE announces a taper, although the BoE is likely to downplay this as a hawkish shift and instead highlight that it is a mechanical unwind. 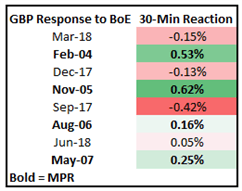