Super Group Holding Co. is set to list on the New York Stock Exchange following a merger with Sports Entertainment Acquisition Corp. (NYSE:SEAH), according to a statement released on Monday. Trading under the symbol SGHC, Super Group looks set to capitalize on frothy market conditions and high retail interest in SPACs. The recent retail mania, which is showing signs of dissipating, has thrust SPACs back into the limelight. To read more about the recent retail craze, please click here.

Super Group, the owner of Betway and Spin, was valued at $4.75 billion in a pre-money equity valuation. Betway is an online sports betting platform, while Spin is a multi-brand online casino. Licensed around Europe, the Americas, and Africa, Super Group is looking to scale its online betting operations into new markets. Hoping to take advantage of a growing U.S. market, Super Group also announced an agreement to purchase Digital Gaming Corporation. This acquisition will provide immediate access to online betting markets in 10 U.S. states.

This SPAC deal takes the total amount of capital raised by SPACs in 2021 beyond $100 billion. While the craze surrounding these alternative listings has died down, companies continue to raise significant amounts of capital through the SPAC process. As of April 26th, 301 companies remain on the hunt for an acquisition target, with another 265 having filed for IPO. 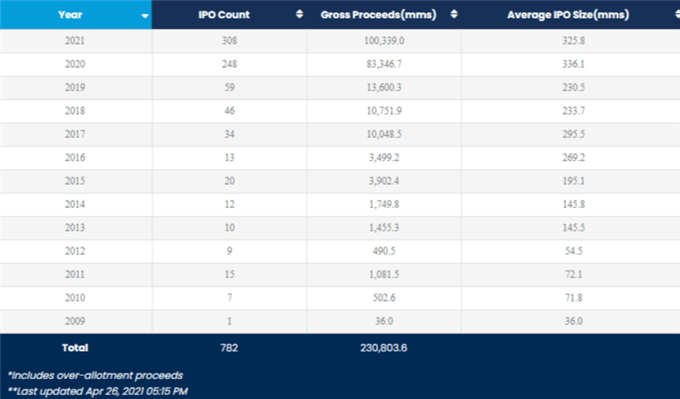 The performance of SPACs following their public listing has also come under scrutiny. SPAK, an ETF that tracks a broad basket of publicly listed SPACs, is down 8.5% YTD while major U.S. indices climb to all-time highs. The dip has coincided with a broad fade in the retail driven rally that dominated the markets earlier this year. As indices have continued to grind higher, it appears investors have shifted focus from speculative names to those benefitting from the “reflation trade.” 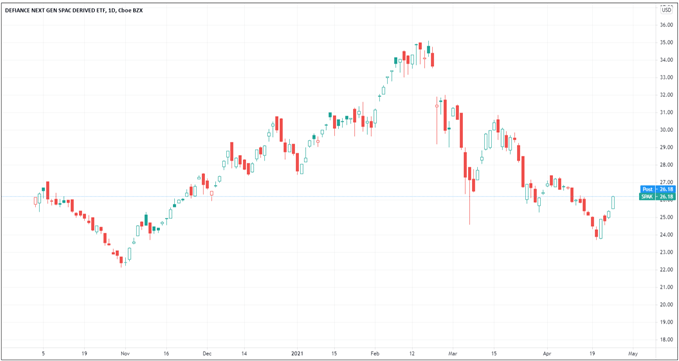