The US economic outlook has continued to improve as Q2 begins. Data prints point to rising demand, increased consumer spending and confidence, and strong activity from both the services and the manufacturing sector. The $1.9T American Rescue Plan has been signed into law and is beginning to provide a further boost to the economy. The rise in longer-term US yields seems to have paused for the meantime. Meanwhile, 1 in 4 American adults have been vaccinated against Covid and the country looks on track to resume some level of normal economic activity this summer.

These factors have provided a boost of major risk assets, lifting the S&P 500 to the 4,000 level for the first time in its history at the beginning of April. 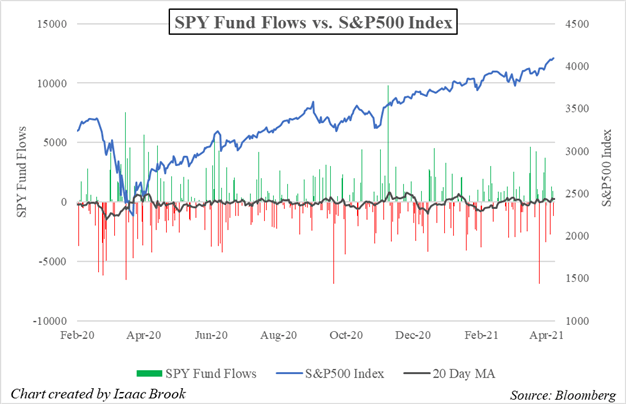 Despite the S&P 500’s recent strength, flows into the SPY ETF continue to be mixed. Shortly before hitting the 4,000 level, the ETF clocked its highest outflow in multiple years. The 20 Day moving average of SPY’s fund flows continues to oscillate around the zero level, reflecting the mixed sentiment in the ETF.

While the S&P 500 has continued to push to fresh record highs, the small-cap based Russell 2000 index has traded sideways. The index has struggled since hitting a record high in mid-March, slipping back from above 2,300 to currently trade in the 2,200 range. Further moves in the index may depend on the timing and path of the economic reopening and further moves in bond yields. 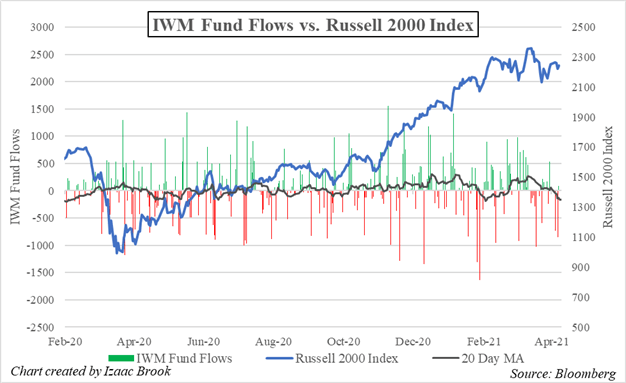 Fund flows in the Russell 2000-linked IWM ETF similarly reflect the struggles the Russell is currently facing. The month of April has mostly seen outflows from the ETF. The 20 Day MA has flipped back into negative territory for the first time since late February, when jitters in the Treasury market drove risk-off sentiment across markets.

While the Russell may see a strong boost from further progress on Biden’s infrastructure bill, it remains to be seen whether said bill will have enough support to be passed. Without a catalyst to drive the index to new record highs, the IWM ETF may continue to see withdrawals in the near future.

Despite the current pause in longer term Treasury yield moves, sentiment in the bond market still remains on edge as investors ponder the potential for higher inflation. Recent and upcoming CPI and PPI prints will not help ease these worries among the less informed, as base effects from last year’s data will show YoY inflation prints well over 2%. YoY PPI for March printed at 4.2%, and March’s CPI data is likely to show a similar story. 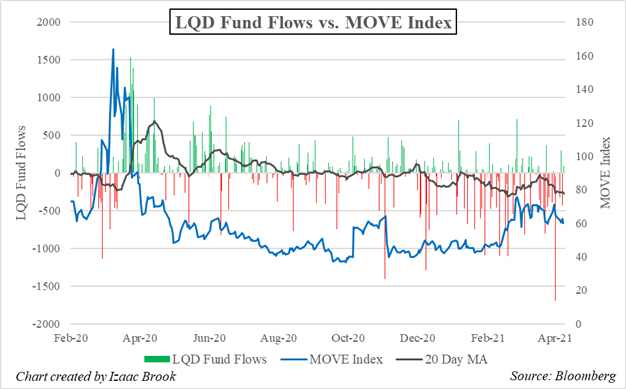 The corporate bond ETF LQD saw its largest outflow on record on the first day of April. While the ETF saw large inflows last March and April on the back of Federal Reserve promises to provide support to the corporate bond markets. The termination of these facilities at the end of 2020 coincided with a large uptick in outflows, and these elevated outflows have continued into 2021 as rates have moved higher. YTD, outflows from the ETF total over $12 billion.

The MOVE Index, which tracks US interest rate volatility, has halted its march higher but remains notably elevated compared to its levels in late 2020 and early 2021. Another move higher in Treasury yields could spell further trouble for LQD and other bond ETFs.