The final release of the Euro Area PMIs beat initial forecasts with the Composite Output Index printing at 53.2, up from 48.8, and the highest level since last July. Business activity bounced back led by ‘surging production’ in Germany, according to IHS Markit with firm’s expectations of growth ‘running at the highest for just over three years amid growing hopes that the vaccine roll-out will boost sales in the coming months’.

The UK final PMI release showed the economy picking up at a robust rate from February although at a marginally slower pace than first thought. According to Duncan Brock, group director at the Chartered Institute of Procurement and Supply (CIPS), ‘The dominant service sector moved up several gears into growth with a strong leap in overall output, topped off with a rise in job creation for the first time since the pandemic began at the beginning of 2020’.

The European Medicines Agency (EMA) is looking at causal links between the AstraZeneca vaccine and a rare blood-clotting event and will announce its findings later today. On Tuesday the EMA’s Marco Cavaleri said that he believed there was a link between the two but the reason why was still unknown. The AstraZeneca vaccine has run into opposition in Europe, and other countries, over various claims of blood clots for various age groups. While official agencies say that the vaccine is safe and having the jab does far more good than harm, any further delay in using the vaccine in Europe would weigh further on a vaccination plan that is running behind both the US and the UK.

The EMA is expected to make an announcement at 16:00 CET today.

The difference in the pace of vaccination between the UK and the EU can in part be seen in the performance of EUR/GBP over the last few months. While the UK has currently administered around 54 doses per 100 people, the European Union is running at less than 20 doses per 100. With the UK economy expected to open up before the EU, EURGBP has been weakening since the end of last year. This move has also been fueled by Euro weakness as a whole as the ECB continues to stress that the monetary taps will remain open until inflation sustainably reaches its target of around 2%.

Yesterday’s sharp pull-back in EUR/GBP, sparked by a bout of Sterling weakness and long-GBP market positioning, is likely to be pulled back over the short-term with the medium-term series of lower highs still in place despite Tuesday’s move. There is noted resistance around the 0.8650 area which should hold in the s/t, while a break and open below the 20-day simple moving average, currently at 0.8560, will then leave 0.85000 as the next target. 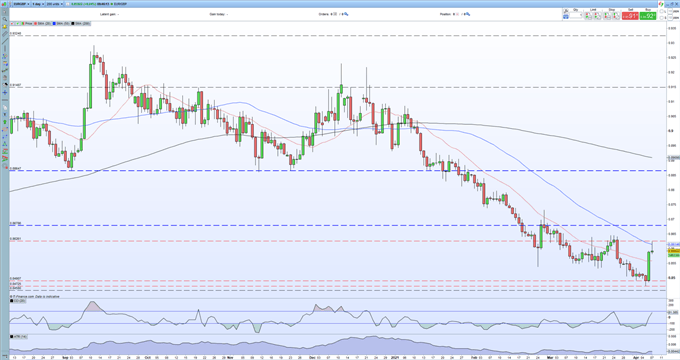 What is your view on EUR/GBP – bullish or bearish?? You can let us know via the form at the end of this piece or you can contact the author via Twitter @nickcawley1.